Illinois Wesleyan University's School of Theatre Arts has announced via Facebook what will be on stage for the mainstage part of their 2017-18 season. No dates yet and the official IWU Theatre page is still showing last year's schedule, but at least we know what we'll seeing if not exactly when. I'm guessing checking back on that page periodically should yield a schedule at some point. 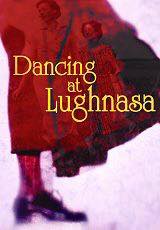 If the order of the photos indicated the order of the shows, first up will be Dancing at Lughnasa, Brian Friel's wistful, haunting memory play set in County Donegal in Ireland in 1936.  The Lughnasa in Dancing at Lughnasa refers to the August harvest festival. The five Mundy sisters are struggling to get by, from the eldest, Kate, a tightly wound schoolteacher, to Christina, the youngest, who has a child but no husband or other means of support. Their lives only get more difficult when their older brother, who'd been a Catholic missionary and chaplain in Africa, returns for unspecified reasons, but has trouble mentally balancing the world he left behind and the one he's reentered. Christina's son Michael is the narrator of the play, standing in for Friel. He appears as an adult to step back into the action of his childhood. Dancing at Lughnasa was first produced at the Abbey Theatre in Dublin, thereafter transferring to London, where it won the Olivier Award for Best Play in 1991. On Broadway, it also took the Tony for Best Play, along with awards for director Patrick Mason and Best Featured Actress in a Play for Brid Brennan, who played Agnes, the shy, tentative sister somewhat overshadowed in the middle of the family, in its Dublin, West End and Broadway productions. 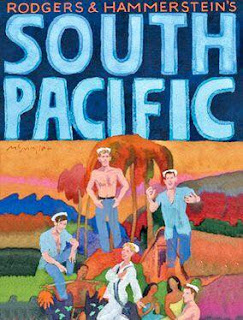 Rodgers and Hammerstein's 1949 musical South Pacific comes next in the picture scroll. Everybody knows "Some Enchanted Evening," "Bali Hai" and "I'm Gonna Wash That Man Right Out of My Hair," right? Based on James Michener's Tales of the South Pacific, this South Pacific features music by Rodgers, lyrics by Hammerstein and book by Joshua Logan, telling the stories of Americans stationed on islands in the Pacific. There's Navy nurse Nellie Forbush, who faces her own prejudices when she falls in love with a French plantation owner named Emile de Becque who has mixed-race children; a squadron of rowdy Seabees led by Luther Bills; and Lieutenant Cable, a forthright young officer in the midst of dangerous missions and a love affair with a native woman. As a child, I remember thinking Nellie was an idiot for her bigotry against two kids who were half-Polynesian, but that's the point of South Pacific, that our prejudices are not innate or logically justifiable but "carefully taught." The original Broadway production won the Pulitzer Prize for Drama and piled up ten Tony Awards, including winning Best Musical along with awards for its book, score, director, producer and scenic design, and sweeping the acting categories, with wins for leads Mary Martin and Ezio Pinza, who played Nellie and Emile de Becque, and featured actors Myron McCormick, who played Billis, and Juanita Hall, who played Bloody Mary, the enterprising mother of Cable's beautiful love interest. 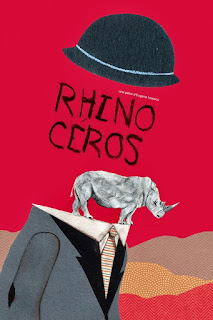 Next on the list in Eugene Ionesco's absurdist drama Rhinoceros, wherein the citizens of a French town inexplicably start turning into stampeding rhinoceroses. One by one, they sprout horns and hoofs, as a lone man, Berenger, tries to hold out against the onslaught. Rhinoceros was written in 1959 and is widely regarded as a cautionary tale about how mass movements like Fascism and Nazism can take over and turn people who were once reasonable human beings into fanatical monsters. In other words, it's perfect for our current international political landscape. Although actor/producer/director/mime Jean-Louis Barrault played Berenger in the original French production and Laurence Olivier took the role in London, it was Eli Wallach who made Berrenger (now with an extra R) his own on Broadway, with Zero Mostel as his intellectual friend John (originally Jean) who turned rhino in front of his eyes. In the showier role, Mostel was the one who won the Tony as Best Actor. In the 1973 film, Gene Wilder played a new version of Berenger called Stanley, with Mostel reprising his role. 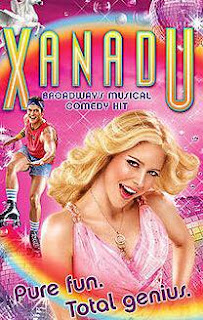 In a real change of pace from the politically and personally provocative to just plain fun, the last show in IWU's mainstage season is the roller disco musical Xanadu, based on the 1980 film that starred Olivia Newton-John as a Greek muse. On Broadway, Kerry Butler took the Newton-John role, while Cheyenne Jackson played the man she's trying to inspire. Douglas Carter Beane spruced up the book from the film script, adding more mythology and a whole lot of parody to send up the campy movie. Along with the roller skates, songs from the movie like the title song and "All Over the World" came with it from screen to stage, with added hits like "Have You Never Been Mellow?" and ELO's "Strange Magic." Click here to see Jackson, Butler and the rest of the cast perform "Don't Walk Away" on the Tonys.

Watch this space for more details on all these shows as dates are added. Check here for IWU's Laboratory Theatre schedule once that's added.
Posted by JulieK at 2:40 PM