Young at Heartland Takes the Spotlight June 23 and 28

It's always a hot ticket when the Young at Heartland troupe of senior actors perform. Every summer, they take the stage at Heartland Theatre for two showcases that highlight their acting and writing talents.

Young at Heartland's actors, all over 55, will perform at Heartland Theatre on Friday June 23 at 1 pm and Wednesday June 28 at 7:30 pm. There are no reservations and no set price; they simply ask for a donation at the door. And yes, it's a popular event, so you are warned to get there early -- at least 20 minutes before curtain, when the doors open -- if you want a good seat. 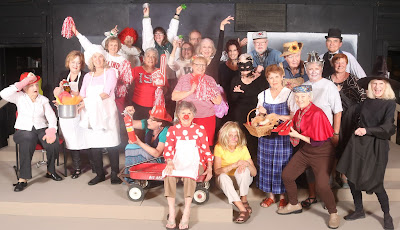 No word on what they'll be performing in this year's program, which represents the culmination of a two-month acting workshop led by veteran director Sandra Zielinski, but I can see what looks like chefs, clowns, firefighters, a matador, a bunch of Wizard of Oz characters, and a bevy of fans and fanatics in this year's photo. (Click on the image above to see a larger copy.) The scenes and short plays these actors perform were all written just for them by current and former YAH colleagues.

Young at Heartland was founded by Ann B. White and continues under her leadership, with two semesters of workshops and performances each year. Ann is the one holding her pom pom high (fourth from the left) in the photo above. She was recently named one of eight area "Women of Distinction" by the YWCA of McLean County for her stellar work with Young at Heartland.

For more information on Young at Heartland, click here. You can also see their entire schedule of area performances here.
Posted by JulieK at 12:46 PM