Your Chance to Catch FALSETTOS on Screen in Bloomington July 12, 15 and 16 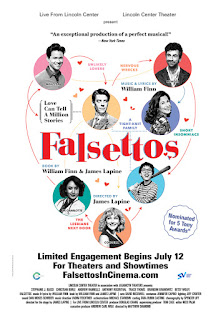 The recent Broadway revival of Falsettos -- the William Finn and James Lapine musical about a gay Jewish man named Marvin, his ex-wife, his son, his new lover, his psychiatrist (who is smitten with Marvin's ex) and the two lesbians next door -- ended its run at the Walter Kerr Theatre on January 8.

To share the Falsettos joy with those who didn't get to see it in New York, Live from Lincoln Center and Lincoln Center Theater are bringing a filmed version of the show to cinemas nationwide starting July 12.

That means we can all share the Falsettos experience, as Marvin falls in love with Whizzer, his new boyfriend, his son Jason prepares for a bar mitzvah, and ex-wife Trina tries to navigate this new world, with some funny stuff and some very sad stuff, offering a portrait of some of the highs and the lowest lows imaginable for gay men in 1979, when it's set. The 1992 Broadway production won Tony Awards for its score and book, with five more nominations, and the recent revival was nominated for five more, including nominations for its Marvin (Christian Borle), Trina (Stephanie J. Block), Whizzer (Andrew Rannells) and psychiatrist Mendel (Brandon Uranowitz).

We have two options to experience Falsettos in Bloomington, with New Vision Ovation Cinema Grill off Towanda-Barnes Road and Wehrenberg Galaxy 14 on Wylie Drive both offering screenings. Falsettos shows up on the Ovation screen on July 12, 15 and 16 and at Galaxy 14 on July 12 and 16.

For more details or to get your tickets now, or if you are looking for showings in other places than Bloomington-Normal, you can visit this Falsettos page at Screen Vision.