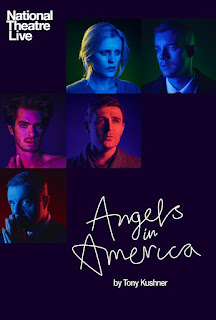 The first half of Britain's National Theatre's take on Tony Kushner's blistering and beautiful Angels in America arrived in cinemas last week, looking and sounding just as timely and affecting as ever. The depth of Kushner's language may be what hits you first, but it's the humanity of his complex, imperfect characters that keeps the Angels fire burning throughout Part One: Millennium Approaches.

This production, directed by Marianne Elliott, has been much buzzed about, partly because of its casting. With Nathan Lane playing Kushner's version of closeted gay powerbroker/Joe McCarthy acolyte/friend of Trump/poisonous toad Roy Cohn and Andrew Garfield as Prior Walter, a sweet gay man with AIDS at the beginning of the epidemic, there was bound to be notice taken. Both Lane and Garfield are turning in terrific performances, making it clear they were cast for more than just their star-power.

Lane is not the cuddly musical-comedy star you may expect from The Producers or La Cage aux Folles, although the jokes about the latter show at the beginning of Millennium Approaches do take on added amusement coming from him. But as the play proceeds, he starts biting off chunks of Roy Cohn and spitting them out, not afraid to go dark and disturbing when he needs to. He also works beautifully with Russell Tovey, who is really stellar as Joe Pitt, the resolute, married Mormon lawyer who is fighting his attraction to men and unsure about almost everything in his life. Joe can be a difficult character to communicate, given all that repression. But Tovey takes him to a much more vital place. He may be tortured and wrong-headed, but this Joe is alive and searching. He may also be the best Joe I've seen, and with Lane half of the best Roy/Joe combination.

Garfield's Prior is (and should be) the opposite of Joe's turned-in persona. At the outset, Garfield seems to be going for drama queen gusto with his Norma Desmond take on Prior, but his scenes with James McArdle as Louis, Prior's boyfriend who can't handle illness or death, put him in the proper context to break your heart. Garfield has some really fine moments when life (and the fantasia part of Kushner's "gay fantasia on national themes") hit him where it hurts, creating some of Millennium's most powerful scenes.

I also enjoyed Denise Gough, whose Harper Pitt is fragile and strange, but also intelligent, as she negotiates her messed-up marriage and the "threshold of revelation" that connects her to Prior as it gives her some unpleasant truths about her husband. And Nathan Stewart-Jarrett is on target as Prior's ex-drag-queen friend Belize, although I'm hoping he is a little more memorable in Part Two when Belize's role grows.

I was less fond of McArdle's portrayal of Louis, which was interesting if not fully satisfying. He sounds as if he's channeling Gene Wilder to get an American Jewish mood, but... This Louis is really not Jewish at all. He even mispronounces "anti-Semitic." And that's a problem, given that Kushner opens the play with a rabbi who is telling us that Louis's Judaism is bred in the bone. Still, McArdle's killer speech about politics and race shows he can handle the density of the language and still make it seem spontaneous, which is key.

The final two actors in the ensemble -- Susan Brown and Amanda Lawrence, who both play multiple roles -- are less than impressive. Brown is fine as the rabbi, but I didn't care for her stiff and chilly take on Hannah Pitt or the ghost of Ethel Rosenberg, and Lawrence struggles to sound American throughout, especially when playing a homeless woman slurping soup in the Bronx. Her entrance as the Angel, which is supposed to be "very Steven Spielberg" and knock-your-socks-off theatrical, is definitely underwhelming, although that seems mostly due to director Elliott's choice to go with hoisting her Angel on the backs of black-clad crew members instead of flying her in through the ceiling and smashing some plaster. This is a bit too minimal and pedestrian.

Ian MacNeil's scenic design and Paule Constable's lighting are also minimalist, focusing on three separate spaces where industrial gray flats edged in neon revolve to carry actors in and out. It's got the look of an Edward Hopper painting now and again, but it's awfully murky, at least on screen, and neither Hopper nor a dystopic Big Brother wasteland suits the material all that well. It's not clear whether the cinematic work needed to transport the action from the National's Lyttleton space to movie theaters is at fault or whether it looked this vast and gray on stage, too, but it's distancing. I have hopes that will improve for Perestroika, too.

In any event, Tony Kushner's masterpiece is strong enough to overcome a few missteps. Or an army of missteps, for that matter. Angels in America, Part Two: Perestroika can't come soon enough. It will be here -- in cinemas nationwide -- Thursday, July 27 at 7 pm.
Posted by JulieK at 3:33 PM