Philip Dawkins and NEW PLAYS FROM THE HEARTLAND Starting Tomorrow

The Mike Dobbins Memorial New Plays from the Heartland project -- combining a one-act playwriting contest with staged readings and a master class for the winning playwrights as well as a public forum to allow the prominent playwright who selected the winners to interact with the Bloomington-Normal community -- is back this week at Heartland Theatre. 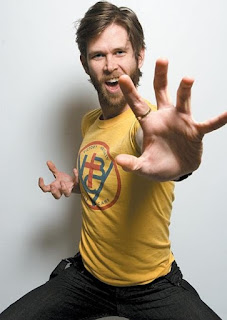 The festivities begin tomorrow night at 7:30 pm when Philip Dawkins, this year's playwright in residence, offers his remarks and takes questions on the art of playwriting in a forum that is free and open to the public. You may remember Dawkins' name from the play Failure: A Love Story, a musical tragicomedy in verse performed at the Illinois Shakespeare Festival in 2013 after a successful run at Chicago's Victory Gardens Theater. Dawkins is also the author of Miss Marx: Or the Involuntary Side Effect of Living (Strawdog Theatre -- Joseph Jefferson Award for Best New Work), The Happiest Place on Earth (Side Show Theatre/Greenhouse Theater Center), Le Switch (About Face Theatre, The Jungle), Charm (Northlight Theatre), The Homosexuals (About Face Theater) and the musical adaptation of Dr. Seuss’s The Sneetches with composer David Mallamud (Children’s Theater Company, Minneapolis). His lyrical, whimsical style makes him a unique voice in American theater.

The three winning New Plays from the Heartland will be performed as staged readings beginning at 7:30 pm on Friday and Saturday and 2 pm on Sunday, directed by Heartland artistic director Rhys Lovell. This year's winners are Golden Land by John Adams of Richmon Heights, Missouri; All Sewed Up by Marty Seigel of Bloomington, Illinois; and Annabelle's Last Stand by Todd Wineburner of Pontiac, Illinois. Here's what Heartland has to say about each of the plays:

GOLDEN LAND by John Adams, Richmon Heights MO
A chance meeting in New York in 1904 illustrates that the apple seldom falls far from the tree. The age-old conflict between the disenfranchised and the privileged plays out on a tenement stoop on a hot summer day.

ALL SEWED UP by Marty Seigel, Bloomington IL
Owners of a small-town business and the town manager go head to head against a high-powered corporation. The lingering smoke from an old flame can’t mask a critical flaw that will bring one side down.

ANNABELLE’S LAST STAND by Todd Wineburner, Pontiac IL
A house is not just bricks and mortar; it’s dreams and memories too. And that’s worth fighting for, as a sheriff who is reluctant to exercise his authority soon learns.

For more information on the Mike Dobbins Memorial New Plays from the Heartland, Philip Dawkins or the winning plays, you can visit Heartland's website for the full scoop. Please note that this new-play festival is made possible by the Town of Normal Harmon Arts Grant and sponsored by Paul and Sandra Harmon.