PEOPLE OF EARTH Is Back (and Not a Moment Too Soon) 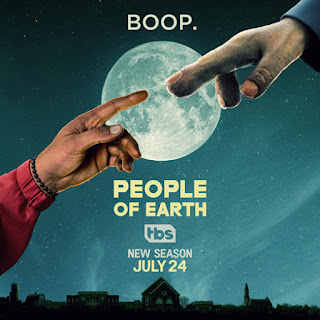 Last year, People of Earth emerged as one of the best shows of the fall TV season. Sweet, odd, whimsical... It was different enough to be intriguing, with characters who were engaging enough to keep me wanting to find out what happened next.

And now it's back, with its loopy humor, cranky aliens (reptile, short gray and tall white), confused humans and generally oddball tone intact. Thank goodness! Let's just say I need People of Earth and its insanity to keep me sane.

The first episode of the new season aired Monday, but don't worry if you missed "New Beginnings," the season premiere. You can still catch it on the TBS site or find repeat screenings tonight at 6:30 pm Central, tomorrow at 11 pm, or Friday at 5 pm. "Uneasy Alliance" is up next at 9:30 pm Monday night.

So where are we in the world of People of Earth and what's ahead for Ozzie, the skeptical journalist (played by Wyatt Cenac) who has finally embraced the fact that he was abducted by aliens as a child? Rebel reptile Jonathan Walsh (Michael Cassidy) and his exploded-robot assistant Nancy (Debra McCabe) are trying to put the pieces back together; little gray Jeff (Ken Hall) is still mourning lost comrade Kurt (Don Nelson) and plotting revenge against group therapy leader Gina (Ana Gasteyer), the one who ran over Kurt; tall, pale alien Don (Björn Gustafsson) has fallen in love with Kelly, one of the members of the group, while pretending to be an Icelandic barista; Gerry the UFO expert (Luka Jones) finally got his wish as he got sucked up by a spaceship; a new boss -- a floating box named Eric (voiced by Peter Serafinowicz) -- has taken charge of that spaceship, and a hardliner of an FBI agent who once shot herself in the foot has shown up in Beacon, where our group lives and meets, because she is determined to find Jonathan, who she thinks is a white-collar criminal on the lam.

Nasim Pedrad, who has comedy chops good enough to go toe-to-toe with Cenac and Gasteyer, is playing Agent Alex Foster. I have no idea where her storyline will take her, but I wouldn't be surprised if she were a love interest for Ozzie, given that he seemed interested in Kelly, but she is entangled with Don, and the other females in the group are all taken. Or if not taken, involved, since Yvonne (Da'Vine Joy Randolph) and Gerry were just starting to connect when he disappeared, neurotic Chelsea (Tracee Chimo) is into Father Doug the Catholic priest (Oscar Nuñez) and Gina has way too much on her plate to deal with romance. Of course, Agent Foster could also fall for Walsh the reptile, since he is very attractive when he's wearing his human skin. Or she could fall for no one and stay true to her mission. Since creator David Jenkins and his writers continue to surprise me, I'm going to go with that last choice.

Can't wait to find out, though! Next Monday, look for "Uneasy Alliance" at 9:30 pm Central Time on TBS.
Posted by JulieK at 4:19 PM