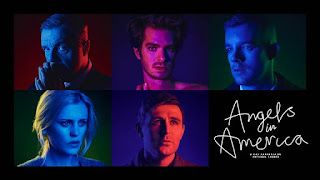 Tony Kushner subtitled his Angels in America "a gay fantasia on national themes." The nation he was referring to was, of course, the United States of America, which is referred to constantly throughout both plays and gets that "America" reference in the title, as well. After seeing both parts of Britain's National Theatre Live cinema presentation of Angels in America, I think I've centered on my biggest problem with this particular take on Kushner's masterpiece. It's just not American enough.

Nathan Lane emerges as a powerhouse in both Millennium Approaches and Perestroika, perhaps because he isn't struggling to find that essential Americanism under Roy Cohn's skin. He's got it. It's to Russell Tovey's and Andrew Garfield's credit that they are better attuned to it, too, and that they both turn in excellent, well thought-out and well executed performances.

As Prior Walter, the man in the center of the action, the prophet, the victim, the one with "gay fantasia" swirling around him, Garfield has the showier role and he makes the most of it. I still think he's channeling Gloria Swanson in Sunset Boulevard too much for his own good, and he looks like he could be Anne Hathaway's twin brother (Anne and Andrew in Twelfth Night, anyone?) but he does jump into Prior's pajamas with both feet, so kudos there.

But I think Russell Tovey is even better as Joe Pitt, the self-loathing gay Mormon lawyer who just can't seem to make his life work. In Part One, Joe is hobnobbing with powerbrokers like Lane's Cohn, imagining himself as a player in Reagan's America. In Part Two, after the explosions of Millennium Approaches, Joe has come hard up against his lies and deception. He's a little panicked and a lot off-balance as he tries to find some sense of who he is. Tovey navigates all that beautifully, with an inner glow that makes it understandable that someone like Roy Cohn would want him on his team, that Louis would be attracted to him, even knowing his politics, that Prior would be devastated to realize THIS is his ex-lover's new beau, that Harper would have married him in the first place. Suddenly the pieces fit.

I can't say that the pieces fit for Susan Brown as Hannah Pitt or Amanda Lawrence as the Angel, however. Brown is better as the World's Oldest Living Bolshevik and her Ethel Rosenberg is good enough in the excellent Kaddish scene, but her Mother Pitt never seems like an American for even a minute. Hannah may be plain-spoken and stiff of spine, but she is also naive in some ways, unknowing instead of uncaring. Brown's Hannah is all rough edges and hard knocks with no layers of humanity underneath. And she can't fully suppress her British enunciation. Lawrence also struggles with the American accents, and she never gets past that problem far enough to sink into her characters. She is undermined by her costumes, as well, which don't take her from the glorious, androgynous white vision carved from Greek marble described in Kushner's Millennium script to the battling black harpy of Perestroika, but leave her as a hard-luck little insect Angel, scraggly and unkempt, throughout. Her version of a Mormon mother who steps out of a diorama is even less successful, blunting the impact of Kushner's "jagged thumbnail" speech and dimming the play's messages about change and suffering.

Those messages are hard to catch throughout Marianne Elliott's production. If this Millennium takes its time to breathe as it sets things up, the companion Perestroika seems to wander and unravel. For a play that debates the wisdom of standing still versus moving ahead, there just isn't enough forward momentum.

Part of that lies in the direction of individual scenes and part of it comes from the murky-after-midnight scenic design, which remains mystifying. Yes, we've lost the revolving set pieces edged in neon (for the most part, anyway) but the new vast and impersonal space with an arching dome -- something like the ceiling inside an old movie palace -- is just as perplexing. I enjoyed the levels and lifts and some of the stage pictures created, like Prior's ladder to heaven, Roy slipping out of his death bed and onto a new plane, and Harper trying to hang on as her scenery is swept away, but in general, the vast expanse swallows up the action. And this stingy version of the Bethesda Fountain, the location for the final scene of the play, is underwhelming at best.

Kushner's play is so beautiful and his characters so strong that it pulls you in even in the places that this particular production falters. There is, after all, some new wisdom to learn from every new Angels in America. This time out, I was struck by a particular speech delivered by Prior:

"Then I'm crazy... The whole world is, why not me?"  As he tells us, every morning he wakes up and it takes him "long minutes to remember...that this is real, it isn't just an impossible, terrible dream."

What could be more timely, more right now than that?
Posted by JulieK at 4:41 PM