Is "Sabrina" Still Fair After All These Years? 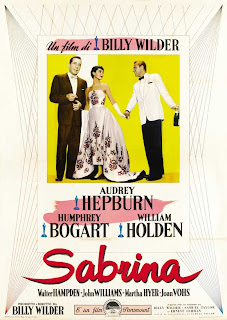 I can't even say how many times I've seen the movie "Sabrina." I loved the Cinderella story of the chauffeur's daughter with a massive crush on the wealthy family's golden boy, the girl who starts as a waif but grows up to acquire a fabulous wardrobe and the ability to attract every male in sight. Yep. Cinderella, all right.

But that was when I was eight or ten, and the idea of Audrey Hepburn, luminous and impossibly lovely at 25, matched up with world-weary Humphrey Bogart at 55, didn't seem all that weird. After all, I was already familiar with Audrey as a love interest for Fred Astaire (also 30 years older) and Gary Cooper (a spring chicken at 28 years older) and I adored "Funny Face" and "Love in the Afternoon."

That worked for me when I was ten, but would it work for me now, when my sensibilities are quite different? Would "Sabrina" seem creepy and sexist and all the other things I complain about now when they pair senior-citizen men with teenage girls?

Well, no. Watching "Sabrina" again, I was caught up in Billy Wilder's magic pretty much from the opening "Once upon a time." Wilder produced and directed "Sabrina" and also collaborated with Ernest Lehman on the script, a script that is lighter than air, terribly romantic, and quite often hilarious. And I buy every bit of it, every time.

It helps that Sabrina is clearly the heart of the movie and Audrey Hepburn is absolutely perfect in the role. She's believable as the ragamuffin who hides in trees to eavesdrop on the Larrabees' fabulous parties, and just as believable as the sophisticated beauty wearing Givenchy gowns. (I chose the French poster to accompany this piece because it shows off the famous dress. I think about 90% of girls who see "Sabrina" wish they could wear that dress just once.)

But there's more to recommend in "Sabrina" than just Audrey. Humphrey Bogart, as tight-laced Wall Street wizard Linus Larrabee, and William Holden, as David Larrabee, the careless playboy Sabrina pines for, are both playing against the type we expect from them. This is not the thug or tough guy Bogie from "The Maltese Falcon," not even the crazy Captain Queeg from "The Caine Mutiny" released earlier that same year. Instead, he's a conservative businessman who doesn't remember how to have fun. It's to Bogart's credit that he's so very good at playing stuffy Linus, and that he was willing to look silly in a too-small Yale sweater and beanie.

Ditto for William Holden, best known for playing cynical, hard-luck smart guys in serious films like "Stalag 17" and "Sunset Boulevard." Here, he's gone blond and a little silly, but it doesn't stop you from rooting for his character. Holden really does look like a Golden Boy.

The supporting cast is one of the highlights of this upstairs/downstairs plot, as you'll notice Grandma Walton (Ellen Corby) showing up as Linus's secretary, Miss Jane Hathaway from The Beverly Hillbillies (Nancy Kulp) as a servant in the Larrabee household, and silent film star Francis X. Bushman as David's prospective father-in-law. John Williams is also terrific as Sabrina's father, who knows no good can come from a chauffeur's daughter falling in love above her (or his) station.

But I think most of the credit for "Sabrina" has to go to Billy Wilder. There's just something about the way humor and sentiment combine in this movie that works like a charm.

"Sabrina" plays the Normal Theater tonight and tomorrow night. What a treat to get to see it on the big screen!
Posted by JulieK at 11:10 AM