New on DVD: Season 2 of thirtysomething 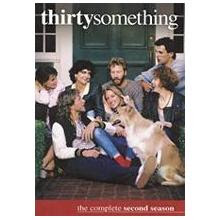 [My friend Jon Alan Conrad guest-blogs about one of his favorite series now available on DVD. Enjoy!]

Every once in a while, a new hourlong television drama breaks with custom and decides not to be about lawyers, doctors, or police (or detectives, firefighters, or vampires); instead, it aims to find drama in the ordinary events of life. Most of the time, such efforts fail to attract an audience, and fail artistically as well. But for the four seasons (1987-91) it was on the air, thirtysomething not only did this, but did it well enough to establish itself in TV history as the standard for a certain kind of drama (alongside later efforts from its creators, Marshall Herskovitz and Ed Zwick). Those who recall it will still mention how it captured tiny nuances: the way people deal with longtime friends and new acquaintances, how they communicate in little jabs and jokes, complaining about little disappointments while fumbling for words when real tragedy strikes. And it didn’t wallow in naturalism, either; every episode included a dollop of fantasy, flashback, parody, or slapstick.

After a long delay (largely, we’re told, because of the challenge of getting music clearances), season 1 appeared on DVD last fall, and now we have season 2 (with season 3 announced for May).

This is the season in which Nancy and Elliot were separated throughout, Michael and Elliot closed their own business and went to work for Miles Drentell, Gary met Susannah, Melissa met Russell, Ellyn ruined her relationship with Woodman, and Hope started writing again. It’s the one with such classic episodes as “We’ll Meet Again” (the past history of the Steadmans’ house), “The Mike Van Dyke Show” (anxieties filtered through a classic sitcom), “First Day/Last Day” (the closing of the Michael and Elliot Company), and “Michael Writes a Story.”

To see these episodes intact again, after so many years, is to be reassured that memories of its quality are no nostalgic illusion: it really was as exceptional as we thought. Certainly there’s a line here or a concept there that doesn’t quite come off, but the general quality puts it on the highest level among series of its time -- or any time. At several points on commentaries we hear a director or writer murmur, “You’d never be allowed to do that now” (let a scene play so long, or so quietly, or in the background in dim lighting), but they’re forgetting that they weren’t allowed to do it on other series back then either. From all that we hear from the commenters (and indeed can see for ourselves), Herskovitz and Zwick ran an exceptional ship: giving chances to novices they trusted (directors came from off-Broadway, feature film, acting -- eventually including most of the regulars -- and the writing staff), and encouraging directors to treat each episode as a one-hour movie with its own style (all the while allowing long-term stories to progress).

Fans of the series will have their favorite moments to treasure; mine are all here just as I remembered: Michael drifting in and out of a black-and-white sitcom as he worries about his religion and his wife; Michael and Elliot shutting down their ad agency, even as we watch their younger selves start it up; Melissa getting a big professional break and not wanting to tell friends about it; Susannah, the newcomer, being abrasive at dinner with the circle of friends (and they with her); Michael visually erasing the details of his excessively fancy short story for his writing class; and the first glimpses of iconic boss Miles Drentell (David Clennon). One delight afforded by hindsight is the chance to watch the names who turn up as guest stars: in this season, Jo Anderson, Rita Wilson, Jack Gilford, Courtney B. Vance (overaged for a high school student, though), Lynne Thigpen, Sylvia Sidney, Phyllis Newman, Estelle Reiner, and many more.

Five discs contain the 19 episodes, beautifully restored, 6 with commentaries by writers and directors, accessed from the most user-friendly menu setup I’ve seen; plus featurettes (with newly filmed interviews) about Miles, Susannah, and Snuffy Walden’s music. On to Season Three!
Posted by JulieK at 10:52 AM