Watch Out! Steven M. Keen Takes on "Killer Joe" at U of I. 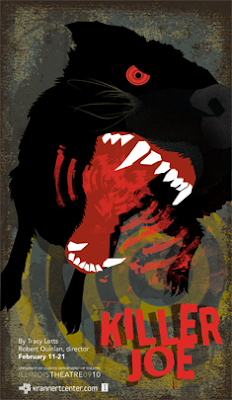 My friend Steven M. Keen, an actor and director in this area for many years, agreed to guest-blog his reaction to Tracy Letts' "Killer Joe," playing in the Studio Theatre at U of I's Krannert Center. I think you're going to enjoy this one.

It was with a fair amount of fear and trepidation that I walked into the Krannert Center to see the University of Illinois Department of Theatre's production of "Killer Joe." I wasn't afraid that I would be assaulted with full-frontal nudity, violence, graphic sex acts, and profanity -- I was afraid that I wouldn't be assaulted enough. I have long believed that if you can't do a show as it is intended to be done, then you have no business doing the show in the first place. And I was afraid that a university theatre department would censor themselves and water down this potent stewpot of a play to make it palatable to more sensitive audiences.

My fears proved to be groundless. "Killer Joe" was presented in all its graphic glory in a very brave, fearless production. This was a long way from the type of "educational theatre" that we so often see on college campuses. This was no Shakespeare, Shaw, or Moliere. It wasn't Miller, O'Neill, or Williams. This was visceral, contemporary stuff by a hot new playwright. I first saw this play in an early Chicago production several years ago. I will readily admit that it takes a lot to shock me, but even I was shocked when I first saw this volatile, in-your-face, thrill ride of a play. How could a university theatre department do justice to it? And is it right to expect them to do so?

"Killer Joe" is an early play from the pen of Tracy Letts, better known as the playwright who gave us "August: Osage County," which went on to win the Pulitzer Prize for Drama, the Tony Award for Best Play on Broadway, and just about every other major theatrical award out there. Like "August: Osage County", "Killer Joe" deals with an American family -- warts and all. The families in the two plays are from different social strata, but they both share dirty secrets, and they both share the same propensity for going at each other's throats.

The plot is fairly straightforward. The lights come up to find Chris, a wayward, druggie son, pounding on the door of his father's house trailer in the middle of the night. Chris is in hock to a local drug dealer and needs money fast. Of course Chris's deadbeat dad, Ansel, doesn't have that kind of money laying around. Neither does Sharla, Ansel's trashy second wife (who evidently abhors the idea of wearing underwear). What to do? Chris has an idea that he wants to bounce off his dad. What if they hire a hitman to knock off Chris's mother who is now living across town with her new boyfriend? It seems that Chris's mother is the only member of this clan with an insurance policy, and the beneficiary of that policy is none other than Chris's dim, ripe sister, Dottie. Once Mom is dead and Dottie has the insurance money, Chris will use it to pay off the drug dealer. Enter Killer Joe, a local law enforcement agent who moonlights as a hitman. Joe states his price and demands his money up front. Chris and Ansel explain that they don't currently have the money, but they attempt to persuade him to do the deed anyway, on the guarantee that he'll receive his money once the insurance policy has been cashed in. Killer Joe, of course, scoffs at this idea and is on his way out the door -- until he sets eyes on Dottie. Killer Joe knows hot stuff when he sees it, and he agrees to the deal with the stipulation that he receives Dottie as a retainer. Done deal. Of course, anyone within a hundred miles of the theatre knows that things will not go as planned. And one outrageousness after another piles up until the entire play explodes under its own force.

Director Robert Quinlan puts the pedal to the metal from the minute this play begins. However, the entire production moves at such a fever pitch that nearly all of the humor in the script is lost. "Killer Joe" is not unlike watching a particularly nasty Jerry Springer episode. We may hate and ridicule what we're seeing, but we can't turn away. And a lot of the reason for that fascination is our guilty pleasure of the wicked humor inherent in such bad behavior. Without that humor, "Killer Joe" comes across as a rather unpleasant experience. And this play is more than just an exercise in shock and titillation. There are real power struggles happening between the characters as things spiral out of control. None of these power plays really has a chance to develop in this production, however, because everything is played full-throttle. It is only in the long, candle-lit seduction scene between Killer Joe and Dottie that things are allowed to breathe and find their real power. Conversely, an extended scene involving two mysteriously overstuffed Hefty bags sitting in the kitchen is totally underplayed and ineffective. Also, I have to say that I've always believed that when an audience doesn't know when a play is over, there are huge problems with how the play has been directed. The night I was in attendance, the audience remained sitting in silence until well after the lights came up for the curtain call.

Perhaps the biggest problem I had with this production was the lack of authenticity in the cast. We all know (or think we know) how people like this look and talk and behave. But as I sat in the audience, I couldn't help but think that I was watching a group of well-educated, well-groomed college students trying to dumb down and slum it. Mike DiGirolamo brought an edgy quality to Chris, but I never got the sense that he was strung out on drugs or wiley enough to hatch this bizarre plot. Nile Hawver lacked stage presence and any sense of physicality in his portrayal of Ansel, the beer-swilling father of this clan. Plus he looked entirely too young and clean cut to be convincing in his role. Monica Lopez, as Sharla, is certainly trashy enough, but only superficially so, lacking any depth to her character. And she also looks much too young and clean-cut. Anastasia Pappageorge also misses the mark as Dottie. Dottie is probably mentally challenged. She's certainly slow on the uptake. She's the unwilling pawn in this scheme that's swirling around her, but this aspect of Dottie's character totally escaped Pappageorge. The character of Killer Joe should be a tightly-wound coil of sex and danger. Killer Joe was played by Scott Carpenter in New York, and that's the kind of actor you need for this role -- someone who has that snake-y kind of smile and oozes menace from the minute he steps through the door. Killer Joe says and does some really outrageous things, and the colder and more in control he is, the more frightening and disturbing he is. Only rarely does he explode, but when he does -- watch out. It was a very strange experience to sit in the audience and recognize that Samuel Ashdown is probably a very good actor, even though he wasn't doing full justice to the role of Killer Joe. Ashdown's Killer Joe was much too ordinary and likeable. And his explosions, when they came, came out of nowhere.

Ian James Anthony's scenic design was the most successful element of the production in terms of authenticity. Played against one long wall of the Studio Theatre, I could easily believe that I was peering through the fourth side of a double-wide house trailer with all of its attendant trash and clutter. Annaliese Weber's costumes, however, missed the mark. Once these characters put on more than their dirty underwear, they didn't look nearly trashy enough. In a play like this, subtle doesn't cut it. Darren W. McCroom's lighting design unfortunately left enough light onstage after each scene to allow us to watch actors get up and exit the stage, thereby negating any dramatic impact. And Elizabeth Parthum's sound design was just annoying. At first, I thought the sound I was hearing was intended to be rainfall outside the trailer, but I ultimately decided that it was probably intended to be the background static on a dead channel of a television set. All I can say for that is -- you try sitting through that noise for thirty minutes before a show starts and for another twenty minutes during intermission! I was desperately searching for a plug to pull. The production could have benefitted immensely from some well-chosen music instead, not only before the show and during the intermission, but also between individual scenes. Also, one of the running motifs in the play is the presence of a vicious dog tied up just outside the trailer door that sounds as if it will take the leg off of anyone who approaches or leaves the trailer. Unfortunately, this particular dog didn't sound all that vicious, and it also sounded like it was chained up in a neighbor's yard somewhere down the road. Hardly a threat at all.

I think "Killer Joe" ultimately trumps just about everything else out there in terms of its sex, violence, profanity, and overall outrageousness. It makes Martin McDonaugh's bloodbaths seem tame. And it makes David Mamet seem like an old codger. But there is something bracing and exhilarating afoot here, and I find it to be a real rollercoaster of a play. However, as I left the theatre, I felt like there was a little Sarah Palin sitting on my right shoulder, whispering doubts into my ear about whether or not this was a play that should be done by a college cast. My liberal self immediately responded with a resounding "Yes!" but I wouldn't be at all surprised if the Krannert Center box office doesn't find itself fending off calls from patrons unused to seeing such actions on a college stage. As for me -- I say "Go for it." Just do it better next time.
Posted by JulieK at 12:47 PM