This year has been one big Stephen Sondheim fest, celebrating the composer-lyricist's 80th birthday back in March. After all the concerts and shows and general festivities that have happened this year, Sondheim fans can keep the party going by catching up with:

1.
Sondheim's new book, FINISHING THE HAT. The subtitle says it all: Collected Lyrics (1954-1981) with Attendant Comments, Principles, Heresies, Grudges, Whines and Anecdotes. It's insightful, candid, maybe a little catty (but only about people who are already dead) and altogether a fascinating look at how he does what he does.

I particularly enjoyed his discussion about (and rules for) rhyming, and that's only the introduction! 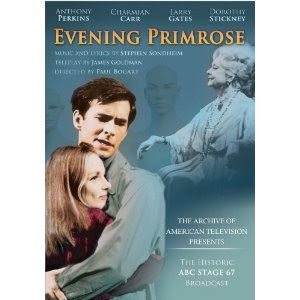 2.
EVENING PRIMROSE, just released on DVD. It's a curious little piece of Sondheimiana, an hour-long TV musical that aired once, on a show called ABC Stage 67, in November, 1966. The plot is reminiscent of a "Twilight Zone" episode, with an antisocial poet, played by Anthony Perkins, who decides to hide out inside a department store to get away from the troublesome world outside. He finds there is already a secret society living there, deep in the bowels of the department store, bound by their own rules and rituals. They are willing to admit him into their odd little colony. But they are very clear; once he's joined, he can never leave.

The teleplay for EVENING PRIMROSE was written by James Goldman, probably best known as the playwright of "A Lion in Winter." Goldman also wrote the libretto for my favorite Sondheim musical, "Folllies." Sondheim's contribution to EVENING PRIMROSE amounts to four lovely songs, including "I Remember" and "Take Me to the World," which have been sung by countless artists in cabarets and concerts, with recorded versions of the former by Barbra Streisand and the latter by Dawn Upshaw.

I can't say this is the most satisfying hour of theater I've ever seen, but it's worthwhile just as a curiosity. The story is compelling, if strange, and it's cool to see Anthony Perkins as a singer, paired with Charmian Carr, who was Liesl in "The Sound of Music."

3.
SONDHEIM, THE BIRTHDAY CONCERT, showing up on PBS's Great Performances tonight in most areas. Peoria's WTVP and Urbana's WILL are scheduled to show the concert at 8 pm tonight.

The program was released on DVD and Blu-Ray November 16th, and I've already perused my copy. Some of the performances are fabulous (Laura Benanti, Donna Murphy, Audra McDonald and Nathan Gunn are particularly moving) and some aren't all that exciting. (Why in the world would they close the solos with Elaine Stritch, the worst singer and most self-indulgent performer of the bunch?) But it's the end, a soaring group number on "Sunday" from "Sunday in the Park with George," that really made an impression. Yes, I will be rewatching it when it's broadcast tonight, even though I've already played and replayed the DVD. Somehow, the communal experience is always better.

Happy 80th birthday, Mr. Sondheim! Thanks for letting all of us celebrate it with you.
Posted by JulieK at 11:04 AM