What's Up in November 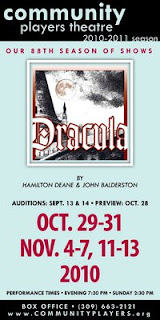 If you thought area theaters and art spots were packing everything they had into October... Au contraire! Here's November, also jam-packed.

First, a couple of October holdovers.

DRACULA, the stage version of the Bram Stoker classic, continues at Community Players through November 13th. The 1977 Broadway version found acclaim for Frank Langella's smoky portrayal of the bloodthirsty Count, while Paul Vellella takes on the role at Community Players. Here's the CP page that will tell you all you need to know.

If you feel like a movie, you'll want to try GET LOW, featuring Robert Duvall, Sissy Spacek and Bill Murray in a black comedy about a crusty old gent who decides to hold a party for his own funeral now, before he dies. GET LOW was directed by Aaron Schneider, a native of Dunlap, Illinois, who won an Oscar for his 2003 short film TWO SOLDIERS. You can catch GET LOW at the Normal Theater November 4 through 7th.

Jared Brown's new trio of plays called THREE FOR THE SHOW also opens on November 4th, with performances till the 21st at Heartland Theatre. All three short plays riff on love and relationships, and all three feature Megan Brown, Gregory Hicks and Rhys Lovell. There were be a post-show discussion with Brown, who wrote and directed this premiere, after the matinee on November 7th. FMI or to order tickets, see the Heartland Theatre Company website.

'SWONDERFUL, a revue about the Gershwin brothers and their musical journey, comes to the Bloomington Center for the Performing Arts on Friday, November 5 at 7:30 pm, while the Andrew Lloyd Webber classic CATS hits the BCPA on the 11th.

TheatresCool offers another one of their Poetry Open Mic Nights on the 9th, with special guests Judith Valente and Susan Baller-Shepard. Valente is an award-winning journalist, twice nominated for the Pulitzer Prize, while Bloomington's own Baller-Shepard has seen her work on spirituality and faith published in leading newspapers, denominational publications, web sites and poetry anthologies. Check out the TheatresCool website for details.

ISU continues its busy (and sold-out) fall season with LES LIAISONS DANGEREUSES, the sizzling play about deception and schemes among some nasty French nobles, written by Christopher Hampton and directed by Jon Ferreira. LIAISONS will play ISU's Center for the Performing Arts from November 11th to the 14th, with matinees on both the 13th and 14th. Tickets are sure to go fast for this one, too, so get to the box office now.

IWU goes a very different direction with ONCE UPON A MATTRESS, the fairytale musical about a princess who swims the moat to rescue her shy prince and then lives through that whole princess-and-the-pea test. MATTRESS, directed and choreographed by Scott Susong, runs November 17-21 at IWU's McPherson Theatre. Info is here.

Across town, Yasmina Reza's ART takes the stage at Community Players. Billed as a dramatic comedy, ART is about what exactly it takes to make art. Andy Cary, Brett Cottone and Ben Hackett play three friends battling over an all-white painting. Is it art? Or just a plain vanilla scam? Figure out what you think November 18-21. CP warns that this special laboratory production is a limited run engagement with only 4 performances.

After that, your Thanksgiving is up to you!
Posted by JulieK at 7:53 PM