Robert Duvall and "Get Low" Know How to Make an Exit 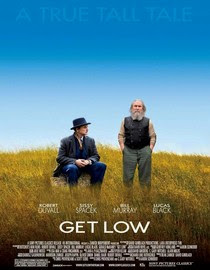 I'm not sure what it says about me that I don't think it's strange at all to want to plan and participate in your own funeral party while you're still alive. Why not? The party is for you, after all.

Felix Bush, the character Robert Duvall plays in the quiet, uncomplicated movie "Get Low," playing last week at the Normal Theater, puts his funeral in motion for different reasons. Felix has been pretty much of a hermit, living in an isolated cabin with nothing but his dogs and a mule, for 40 years. Everybody in town tells stories about him, although we never really get to hear them. But it's clear he's a crusty old gent who doesn't take kindly to human weakness. And that's why he wants a party now, while he's still kicking, to hash out once and for all the reason he became a hermit and cut off all contact.

Because Robert Duvall is playing Felix, he comes equipped with a whole lot of dignity and grace. Duvall knows how to work every tiny flicker of emotion so that it seems real and human and beautiful. His Felix becomes a lot deeper than the stereotypical curmudgeon we've come to expect in our movies, and even though the secret he's keeping about his past gets stretched out to the last possible moment, and in the end, we find out he really didn't do anything so wrong, it's still moving and sweet, redemptive and sad.

Bill Murray, one of my favorite actors, also shows up as Frank Quinn, a sad-eyed quipster of an undertaker working hard to get Felix's business in a town where people just aren't dying fast enough to keep a funeral parlor going. Murray's brand of sardonic humor is one of the film's biggest assets, plus he and Duvall really click. More movies with the two of them playing off each other, please.

Others in the supporting cast who add to the tableau are Lucas Black, a former child actor playing the good guy who works at Quinn's funeral home and provides a moral compass, and Bill Cobbs, another deep and deliberate actor, as a man of the church who knew Felix when. It's also nice to see Sissy Spacek back on the screen as Mattie, a woman who had a flirtation with Felix 40 years ago. Spacek is her usual genuine, appealing self, and that adds a lot, too.

"Get Low" was directed by Aaron Schneider, a native of Dunlap, Illinois, and he gives his film an easy, laid-back tone that suits the story and Duvall's performance perfectly. It's a pretty film, with vistas of trees and sky, spooling out at a leisurely pace that never seems too slow. A couple of plot points eluded me in Chris Provenzano's and C. Gaby Mitchell's screenplay, like why a subplot with town bully Carl never pays off and why he and a bunch of other unrelated people (including Mattie, Quinn and the town preacher) are suddenly playing cards together, but in general, I found myself buying the premise and going along for the ride. And by the time Felix gets to his funeral, ready to give the speech of his life, I was willing to listen to anything Robert Duvall wanted to tell me.

"Get Low" is a not a flashy movie. But it is heartfelt and emotional, with a lot to say about how to find forgiveness. I appreciated the fact that it was never preachy, with no real soap box. Just some fine performances and an elegant way to say goodbye.
Posted by JulieK at 2:36 PM