A True Confession, Wherein Your Intrepid Reporter Goes to See an American Idol in Chicago 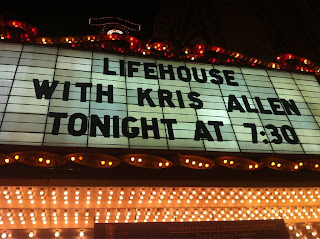 Okay, I admit it. I watch "American Idol" from time to time. This fact always surprises people who know I'm a bit of a snob about movies and theater. No Matrix, no Porky's, no Andrew Lloyd Webber. And yet I like "American Idol."

Well, I don't like it like it. Its tactics and manipulations are often reprehensible. Simon Cowell and his snotty comments are not my cup of tea. I often dislike the pampered pets they try to sell me the hardest. And I never, ever go for the schmaltzy or bombastic voices they seem to think define the very essence of an American Idol. But I do find myself rooting for underdogs from time to time, especially the people the producers and judges seem to be ignoring, and I have even been motivated to vote when somebody takes my fancy. It's a sickness, I know. Or just a weakness.

A couple of seasons ago, I was quite taken with unassuming Kris Allen, the sweet kid from Arkansas who managed to make it past all the flashier contestants who'd been given all the screen time through the audition rounds. Allen didn't get what is commonly known as the "pimp" spot (singing last) as many times as the big faves, he wasn't a very good interview (not being incredibly perky or slick) and yet he seemed genuine and modest and charming. And I really liked how he sang. (Yes, I know. "American Idol" tries to make it about anything but how they sing. Still, sometimes, it's the singing that draws you in.)

After all the ups and downs and a whole lot of craziness, my fave actually ended up winning that season of "American Idol." And then he put out the de rigeur album, and I even liked it!

Allen and his band came to Chicagoland last summer, but I happened to be a thousand miles away at the time. So when I heard that he was returning in November as the opening act for Lifehouse, I jumped at the chance to buy tickets. This made no sense to my husband, so I asked my niece, Nicoletta, a charming singer and performer herself, if she wanted to go. She did. We set out for the Chicago Theater on time, meaning we got settled in our lovely seats (my jumping act meant I nabbed very good seats) and caught the opening act, a young woman named Alyssa Bernal who is billed as a "Youtube sensation." I don't know what that means, but she was very cute and could actually sing, and when it comes to young singers, that's always a plus. The downside was that the sound wasn't mixed properly, muddying things a bit, and it seemed strange that a singer/songwriter with a knack for pretty melodies and earnest lyrics had a dramatic mohawked punk guy playing bass and drawing focus behind her. I liked her stuff, though, especially a duet with her keyboard player and her single "Cali Cali Cali," a breezy little song about (as you might expect) California.

But the main event for me was Kris Allen, and I was happy to see not only that he performed like a champ, but that he was very well-received by an audience mostly there for Lifehouse. His singles "Live Like We're Dying" and "Alright With Me" got a lot of enthusiastic singalong happening, and my personal favorite, a breakup song called "Is It Over," was absolutely epic, with a sensational solo from lead guitarist Andrew DeRoberts.

Allen's set was just under an hour, and I knew I would be leaving shortly afterwards since I wasn't all that interested in Lifehouse, anyway, but I absolutely felt I got my money's worth. Kris Allen and his band were polished and energetic, as well as a whole lot of fun, and they communicated a real joy of performance that was also a joy to watch. By the time Allen closed with the Beatles' "Come Together," spilling into the audience to high-five and generally commune with the hoi polloi, I was ready to deem my concert-going experience a rousing success.

I'd like to see the Kris Allen Band as a solo act the next time, and I'd like them to come a little closer than Chicago. Surely somewhere in Bloomington-Normal or Champaign-Urbana has a venue that fits this feisty little band. Fingers crossed!
Posted by JulieK at 4:41 PM