Comedy, Nietzsche and the Meaning of Life in GROUNDHOG DAY

You know what you're supposed to be watching right now, right? Groundhog Day! 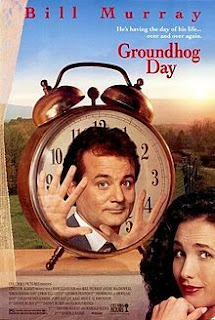 The tradition of Groundhog Day is that a large, furry rodent emerges from his burrow on February 2 of each year, and his reaction to the weather outside gives us information about how long the winter will last. If it's sunny enough for the groundhog to see his shadow, it presages six more weeks of col weather. But if it's cloudy or otherwise murky enough that he doesn't see his shadow, we can all celebrate an early spring. Go, vision-impaired groundhog!

Legend has it that Groundhog Day began in the United Stated with German settlers in Pennsylvania, as a celebration of Candemas Day. And that's why Pennsylvania's Punxsutawney Phil is the granddad of groundhog prognosticators.

In Illinois, we have two choices (that I know of) for weather forecasting woodchucks on Groundhog Day. There's Peoria (or environs, anyway), where Gertie tells the future of the weather at the Wildlife Prairie State Park. And Woodstock, where the film Groundhog Day was filmed back in 1992. Although Woodstock was only standing in for Punxsutawney in the movie, the town has embraced the Groundhog phenomenon as if it began there.

I am happy to report that all three prime groundhog sites -- Punxsutawney, Peoria and Woodstock -- have predicted an early spring this year. Yes, that's right. No groundhog has seen his shadow today.

That gives you even more reason to celebrate by watching the movie Groundhog Day. Directed and co-written by Chicago native Harold Ramis, Groundhog Day is a lovely piece of work. Part romantic comedy, part philosophical exploration of the meaning of life, the film has been embraced by Christians, Jews and Buddhists as well as a film scholar who thinks it's a perfect illustration of Friedrich Nietzsche's "thoughts about eternal return."

The beauty of Groundhog Day is that it does all its heavy lifting, all it soul searching, with a light, sweet tone that keeps you smiling and engaged throughout. As the story of a man, a sarcastic, shallow weatherman, who keeps waking up to the same day, who can't get unstuck from Groundhog Day until he learns and grows and becomes a better person, Groundhog Day has a clear message about embracing life tucked inside the comedy. Bill Murray's patented smart-ass character works perfectly inside that conceit, and he shows what a good actor he can be with Phil the weatherman's growth arc. Andie MacDowell is just fine as the warm and sympathetic love interest, while Chris Elliott and Stephen Tobolowsky (who plays Ned Ryerson, which happens to be the name of a guy I went to high school with -- Hi, Ned!) create wonderful supporting characters.

And the screenplay, credited to Ramis and Danny Rubin, is a terrific example of why comedy works as an art form and how well it can illuminate our lives. If I'm honest, I am much more moved by this movie than any five-hankie weeper. As we near the Oscars and their annual beatification of brooding dramas about death, war and "important" topics, that's a good lesson to remember.

If Groundhog Day is on the telly today, I'm not finding it in the listings. But it is available from Netflix and Amazon, and, of course, I own a copy.

Happy Groundhog Day! You know where to find me.
Posted by JulieK at 11:30 AM