Shakespeare's As You Like It starts in France, at the court ruled by the usurping Duke Frederick. He's a bad guy, keeping his daughter Celia on a short leash and acting all menacing to her cousin, Rosalind, the daughter of the rightful duke. 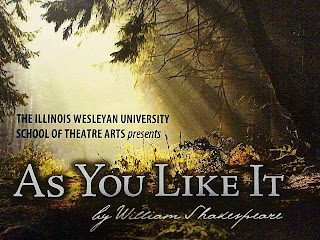 To portray the decadent duchy, director Tom Quinn makes Illinois Wesleyan University's current production all shadowy and noir, a vision of urban American in the early 40s, the land of The Maltese Falcon (1941) and The Big Sleep (1946), where thugs wearing Fedoras do their dirty work in dark alleys and snazzy nightclubs.

That's certainly atmospheric, turning Duke Frederick into a kind of hard-boiled Dick Powell character, with Celia and Rosalind dames in high heels not unlike the Jane Greers and Joan Powells of yesteryear, and Touchstone the clown turned into a Joe E. Lewis style nightclub comic.

But once Roz and Celia go on the lam to the Forest of Arden, we lose the noir feel, instead inhabiting a free-wheeling rural landscape where the temperature is cold but the company is warm. With music and food and furs wrapped around our exiled heroes, the dark mood lifts, the season moves from winter to spring, everybody starts getting frisky, and love is in the air. Rosalind meets up with her Orlando, Touchstone romances a local lass named Audrey, and Celia even gets a late-in-the-day suitor.

Geena Barry makes a lovely Rosalind for IWU, looking just as fetching in her boys' cap and trousers as she does in the opening cocktail dress. She matches up well with Ben Mulgrew, a more boyish Orlando than most, and their faux-wooing comes off very sweet and charming.

Elaina Henderson gives Celia a lot of personality, as well, and T. Isaac Sherman shows both sides of the Dick Powell persona, giving Duke Frederick the hard guy Powell from Murder My Sweet and Duke Senior the warm, nice guy Powell from Susan Slept Here or Christmas in July.

Jacques, the gloomy philosopher with the Seven Ages of Man speech, gets a lighter touch from Ian Scarlato, who seems to be playing for laughs in his interaction with Touchstone, here played by Will Henke as a light-footed jokester in a porkpie hat.

In the ensemble, Kate Rozycki, Maggie Sheridan, Mandi Corrao and Will Greenlee do good work adding a certain wild musical streak to the proceedings. That echoes Quinn's director's notes about the wilderness within as represented by the Forest of Arden.

Overall, this is a warm, fun As You Like It, one that looks good and moves well, with lovers and lunatics at every turn.

Running time: 2:40, including one 15-minute intermission

Email ThisBlogThis!Share to TwitterShare to FacebookShare to Pinterest
Labels: As You Like It, Geena Barry, IWU School of Theatre Arts, Shakespeare, Tom Quinn