The Illinois Shakespeare Festival sent out its season brochure this week, and there are some very new choices on the schedule under new artistic director Kevin Rich.

In addition to the usual Shakespeare mainstage shows performed during the summer at Ewing Manor -- Comedy of Errors runs from a special preview on July 5 to August 8 and Macbeth opens with its own preview on July 6, finishing up August 9 -- Illinois Shakes has added a brand-new option, Philip Dawkins' Failure: A Love Story, a "beautiful, whimsical, extraordinary" play about three sisters, the man who loves them each in turn, and an eccentric musical chorus, set in Chicago in 1928. Failure previews on July 11, followed by performances through August 10.

But that's not the end of the surprises. For those three shows, ISF has also added a "flex" ticket option, so that you can buy an advance season pass (must be purchased before May 12, 2013) and then "spend" it on any performances you choose all season. And after last summer's heat wave, they're offering 1:30 pm matinee performances on Saturdays and Sunday, and moving them inside to the air-conditioned comfort of the Center for the Performing Arts on the ISU campus. That gives you the option of Macbeth during the afternoon of Saturday, July 20, Comedy of Errors on Sunday, July 28, or Failure on Sunday, July 21 and Saturday, July 27.

Other special projects include a staged reading of The Reign of King Edward III from the Shakespeare Project of Chicago, with ISF artistic director Kevin Rich reading the role of Edward. That's set for the CPA on Monday, April 22 at 5 pm as a kick-off for the new season and a celebration of Shakespeare's birthday, all in one. 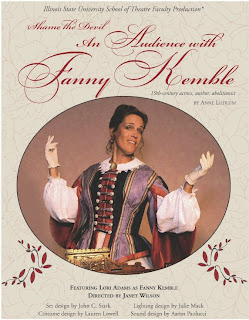 I feel like an informercial, but seriously, there's more! First, more improv with ISU's Improv Mafia and the Shakespeare Globetrotters Time to Make the Shakespeare, performed on the patio at Destihl Restaurant and Brew Works in Bloomington on Thursday nights in May and at Ewing Manor on Sunday evenings beginning July 14. Plus two new greenshows written especially for the Illinois Shakespeare Festival by local author Nancy Steele Brokaw. And a children's show called The Magical Mind of Billy Shakespeare, written by Kevin Rich, performed at 10 am on Wednesdays on the grounds at Ewing Manor starting May 29, with Saturday performances beginning June 1 split between Ewing,  Lincoln Park at the Bloomington Center for the Performing Arts and the Bloomington Farmers Market.

Too many choices? Your mind spinning? Look out for the first event with Edward III on April 22, and then take it one step at a time through that last performance of Failure: A Love Story on August 10. And right now... Tickets are on sale. Call 866-IL-Shake or check out all the details at the Illinois Shakespeare Festival website.
Posted by JulieK at 1:16 PM