Bryan Cranston Going ALL THE WAY to HBO with Steven Spielberg 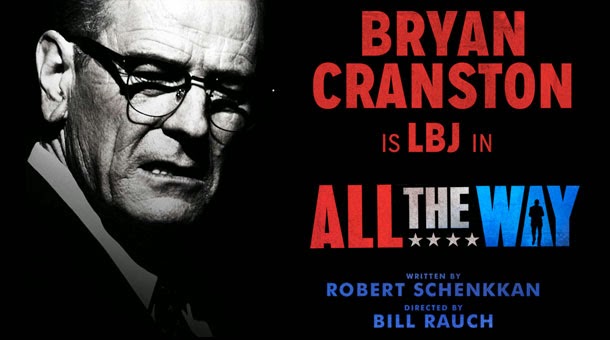 HBO Films will be bringing a bit more Broadway to our televisions with Robert Schenkkan's All the Way, the Tony, Drama Desk and Steinberg/American Theatre Critics Association New Play Award winning play. Bryan Cranston, who won the Tony as Best Actor for his performance as Lyndon Johnson in the Broadway production of the play, will also star for HBO.

Deadline reported last month that Steven Spielberg had optioned the play for a possible miniseries, and now they've confirmed that the project has landed at HBO, which recently scored a major hit -- and a lot of Emmy nominations -- with the televised version of Larry Kramer's The Normal Heart. That adaptation from stageplay to screenplay was made by the playwright, and All the Way will get the same treatment, with Schenkkan himself penning the adaptation. He has worked with Spielberg before, on the World War II miniseries The Pacific, which also aired on HBO.

All the Way was originally commissioned as part of the "American Revolutions: The United States History Cycle" project at the Oregon Shakespeare Festival. Characters like Hubert Humphrey, J. Edgar Hoover and Martin Luther King, Jr. populate the landscape of the play, an exploration of how Lyndon Johnson came to power and how this "charismatic, conflicted Texan hurl[ed] himself into Civil Rights legislation, throwing the country into turmoil," as described by the ATCA judges when they decided the play was worthy of their top award. They called the play "an engrossing, epic" play and described Schenkkan's version of LBJ as "complex, obscene, brilliant and ruthless."

Before The Pacific or All the Way, Schenkkan had already shown he knew what to do with historical material -- he won a Pulitzer Prize for The Kentucky Cycle back in 1992.

On Broadway, All the Way featured University of Illinois alum Brandon Dirden as Martin Luther King Jr., Illinois State University alum Robert Petkoff as Hubert Humphrey, and This Is Spinal Tap alum Michael McKean as J. Edgar Hoover. No word yet on who will take the supporting roles for HBO, but it seems likely it will feature an all-star cast like the one in The Normal Heart. On Broadway, Joe Mantello played Ned Weeks, but that became Mark Ruffalo for the film, good-looking-in-a-regular-way John Benjamin Hickey turned into beautiful Matt Bomer, and Ellen Barkin's role was taken over by Julia Roberts, presumably for more box office appeal. Only TV star Jim Parsons (The Big Bang Theory) kept his role from stage to screen. That means we might expect everybody except Bryan Cranston to be replaced with actors who have bigger names or more star wattage. David Oyelowo, Nelsan Ellis and Malik Yoba have played King recently, while Leonardo DiCaprio tried on J. Edgar Hoover for size not that long ago. Humphreys are harder to find. So let's just keep the Broadway cast, shall we?
Posted by JulieK at 5:00 PM