Nathan Lane and THE NANCE Tonight on LIVE FROM LINCOLN CENTER 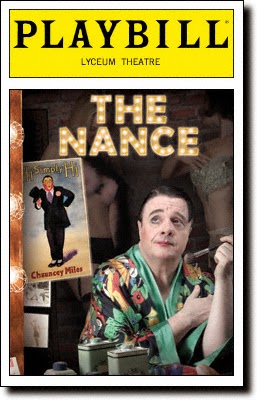 Ever heard of antonomasia? It means using a word or epithet in place of a name, like calling David Ortiz "Big Papi" or Elvis "The King," or the opposite, using a proper name to denote a type or characteristic, like calling any run-of-the-mill traitor a "Benedict Arnold."

Throughout history, women's first names have been used in the second way. A lot of them were tossed around to indicate sluttiness or general lack of class. Think "greasy Joan" keeling the pot and "Some men love must love my lady, and some Joan" in Love's Labour's Lost. There's no character named Joan in the play, but for Shakespeare, calling a woman a Joan meant she was the opposite of a lady.

Over the years, pretty much every common female name has had its turn in the hot seat as a synonym for a woman of loose character. And quite a few women's names -- Mary or Mary Ann, Alice, Pansy, Molly, Daisy, Nelly -- have been used as euphemisms for effeminate men. And then there's The Nance. Epithets like "nancy boy" or "Miss Nancy" gave way to "Nance," which became a term for "a flamboyantly effeminate stock character that is all swish, wrist flicks, and double entendres" in burlesque revues.

And that's where Douglas Carter Beane got the title for his play The Nance, about a man named Chauncey Miles who plays that kind of character in burlesque at Lower Manhattan's Irving Place Theatre in 1937. In a New York Times interview, Beane explained, "Gay characters like nances used to be the brightest ones in the burlesque sketch, usually the victor of the sketch — getting the upper hand on everyone else. But in the 1940s the nance character started becoming an object of ridicule, and by the 1960s it was just awful — the nance was usually subjected to offensive jokes and sexually derogatory put-downs that were really ugly."

His play became an examination of the personal and private sides of a gay man in the 1930s. Chauncey is a star because he minces and prances and exaggerates effeminacy on stage, but he has to suppress any hint of his homosexuality in his personal life for fear of being arrested or ruining his career. Or, as the Lincoln Center promotional materials put it, "At a time when it is easy to play gay and dangerous to be gay, Chauncey's uproarious antics on the stage stand out in marked contrast to his offstage life."

Nathan Lane played Chauncey in The Nance on Broadway at the Lyceum, in a production directed by Jack O'Brien. Although reviews were mixed, the play won three of the five Tony Awards it was nominated for, and took home a Drama Desk for its music. Aside from Lane, the cast included Andrea Burns, Cady Huffman, Miranda Hull, Geoffrey Allen Murphy, Lewis J. Stadlen and Jonny Orsini in his Broadway debut as a young love interest for Chauncey.

If you missed The Nance in its Broadway run, never fear. It will run tonight on most PBS stations under the Live at Lincoln Center banner. It will air at 8 pm Central time tonight on WTVP, Peoria's public television station, as well as WILL from Urbana, with repeats on both stations at 1 am.
Posted by JulieK at 2:05 PM