October 23 Openings, Part Two: THE SHAPE OF THINGS at IWU 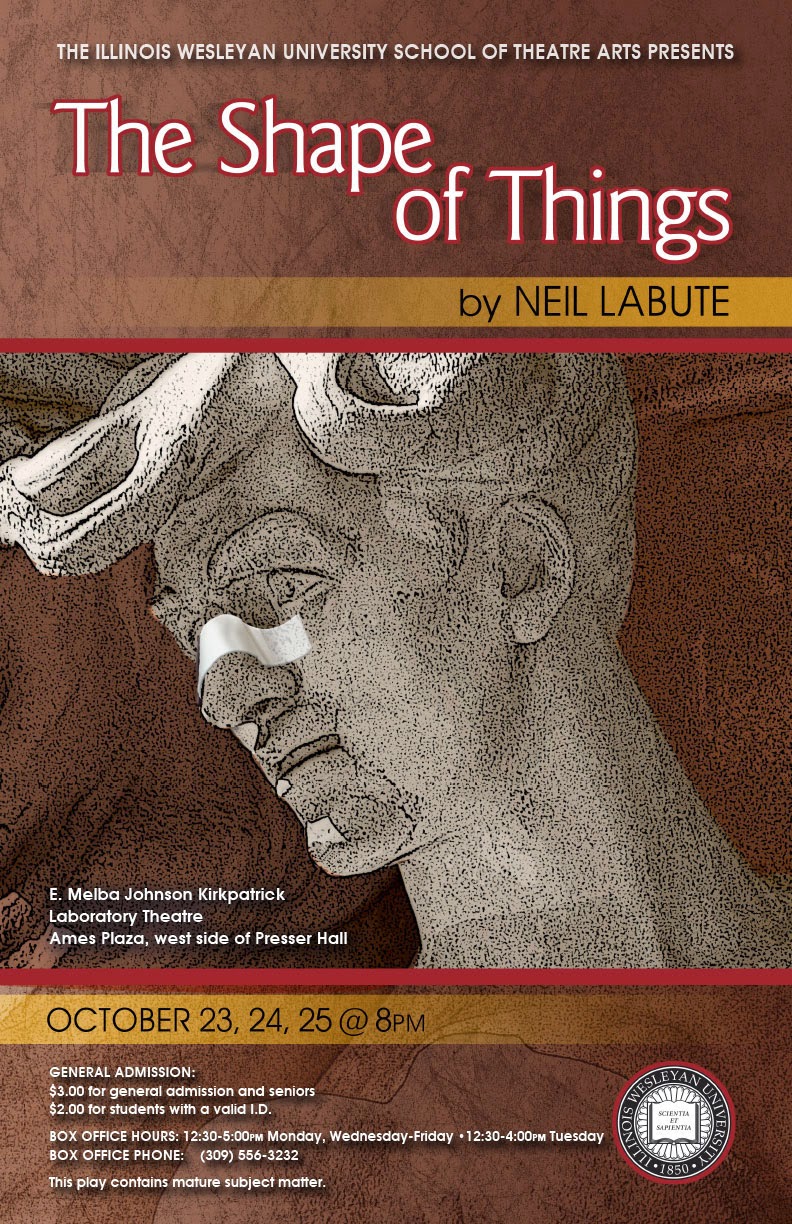 Yesterday, we talked about the fact that there are three different entertainment options taking a bow on the 23rd. The first (alphabetically speaking) was ShakesFEAR!, a haunted house/Halloween event from the Illinois Shakespeare Festival at Ewing Manor.

We wander over to Illinois Wesleyan's E. Melba Johnson Kirkpatrick Lab Theatre for the second choice opening tomorrow, a scary little piece called The Shape of Things from the acid pen of Neil LaBute.

On its face, The Shape of Things is LaBute's take on Adam and Eve, with the plot centered on a fairly innocent, insecure man named Adam faced with a manipulative, controlling woman named Evelyn. LaBute wrote The Shape of Things in 2001; its London stage production was followed by a 2003 movie with the same cast, including Paul Rudd and Rachel Weisz as Adam and Evelyn and Frederick Weller and Gretchen Mol as Adam's friend Phillip and his fiancee.

It's an interesting choice for IWU, especially on the heels of Sam Shepard's A Lie of the Mind, another look at the complex and messy state of relationships and gender politics in modern America.

Plus The Shape of Things is set on the campus of a Midwestern college, not unlike IWU except for the fact that it has graduate programs. At LaBute's fictional Mercy College, Adam is a fairly schlubby undergrad studying English Lit and slinky Evelyn is a grad student in art. They meet at the campus art museum where he works when she jumps a rope with the intent to pull the fig leaf away (or paint new genitalia on) a statue of God. As Evelyn throws a snare or two, Adam is smitten, enabling her to turn him into a very different version of himself. And after that... Let's just say things get tricky, even without an actual garden, apple or serpent. LaBute uses his trademark take-no-prisoners style and razor-sharp characters to examine art, knowledge, the morality and immorality of seduction, and the superficiality of sexual attraction based on what's on the outside. The title The Shape of Things refers to that last bit, the "obsession with the surface" Evelyn talks about in the play.

Professor of Theatre Arts Nancy Loitz directs The Shape of Things for IWU, with Evan Dolan and Elizabeth Ferris as Adam and Evelyn and Nick Giambrone and Cathy Colburn as Phillip and Jenny.

Performances begin tomorrow at 8 pm at the Kirkpatrick Lab Theatre and continue through Saturday night. Tickets -- $3 for the general public and $2 for students with a valid ID -- are available through the McPherson Theatre box office at 309-556-3232.
Posted by JulieK at 2:15 PM