Thrills and Chills (and Assorted Fun Stuff) in October

Ah, October. So often you come with monsters and mayhem as your entertainment options. It may not be my cup of tea but it's just something you get used to when October arrives, kind of like pumpkin suddenly being all over everybody's food and beverages. Pumpkins, poltergeists, serial killers... Yeah, that's October.

So, yes, there is scary stuff on the menu this month, from the Art Theater Co-op's Scream + Shocktober Kickoff Party tonight to a Titanic-themed murder mystery dinner from CUTC in Champaign on the 18th and a Shakespeare-centric Halloween option called Shakesfear coming from the Illinois Shakespeare Festival on October 23, 24 and 25.

A Lie of the Mind, Sam Shepard's 1985 play about two severely dysfunctional families, domestic violence and the dangerous landscape of the human heart, is scary in its own right, if not for the same reasons as most Halloween fare. It also bears the distinction of inspiring my personal favorite among opening lines of my reviews. When I saw a University of Illinois production a very long time ago, I chose to open my review with "Sam Shepard plays are like eating dirt. They're gritty and real, but they don't taste very good."

This new Lie of the Mind started last night in the E. Melba Kirkpatrick Laboratory Theatre at Illinois Wesleyan University. Tom Quinn directs a cast that includes Nick Castellanos, Shen Yee Choong, Casey Cudmore, Steven Czajkowski, Alexa Eldridge, Forrest Loeffler, Debra Madans and Alec Sutton. If you're in the mood for some Shepard, you'll need to get to IWU's Lab Theatre before Sunday the 5th to see whether you think his plays really are like eating dirt.

On the not-necessarily-scary side, Heartland Theatre is currently accepting submissions in its annual 10-minute play contest. This year's theme is Class Reunion, the final deadline is February 1, 2015, and plays will be staged in June, 2015. And if you don't have a Class Reunion play handy, you have plenty of time to plot one out.

Also opening Thursday is Naomi Iizuka's Polaroid Stories, a version of Ovid's Metamorphoses with dead end street kids, junkies and hookers instead of nymphs and princes. Iizuka's poetry and sharp edges make Polaroid Stories feel current and jagged, raw and real. Lisa Gaye Dixon directs for Illinois Theatre in the Studio Theatre inside the University of Illinois Krannert Center for the Performing Arts, with performances October 2 to 12. You can check out the show's whole program here to see who's who and what's what with Polaroid Stories.

The relationship musical, I Love You, You're Perfect, Now Change, with music by Jimmy Roberts and book and lyrics by Joe DiPietro, comes to Bloomington-Normal again via Prairie Fire Theatre October 3 through 11 at the Fellowship Hall of the First Christian Church in Bloomington. Click here for info.

The Art is taking its Shocktober thing seriously, offering Poltergeist on the 3rd, Psycho on the 8th, Re-Animator on the 10th, The Lost Boys on the 15th, The Exorcist on the 19th, Candyman on the 22nd, and an all-night horror marathon (featuring Halloween and Trick 'r Treat) on the 24th. That's a whole lot of fright! And in the case of Psycho, at least, a very good movie. Check out the Art's website for all the Shocktober details.

Your Normal LGBT Film Festival comes back to the Normal Theatre October 15 to 19, with a wide array of films and extras. There's The New Black on the 15th, followed by a discussion with Karess Taylor-Hughes, an activist who appears in the film; Lilting, followed by a social event at Medici's across the street, on the 16th; To Be Takei, about Star Trek actor and internet sensation George Takei, on Friday the 17th; Appropriate Behavior, with an after-party at University Galleries, on the 18th; and The Way He Looks, followed by a panel discussion on anti-bullying, wrapping up the festival on the 19th. Each of these films has a different take on today's LGBT experience, from Brooklyn to Brazil, from a Cambodian mother in London to a Japanese-American son in Hollywood and a black community in Maryland. 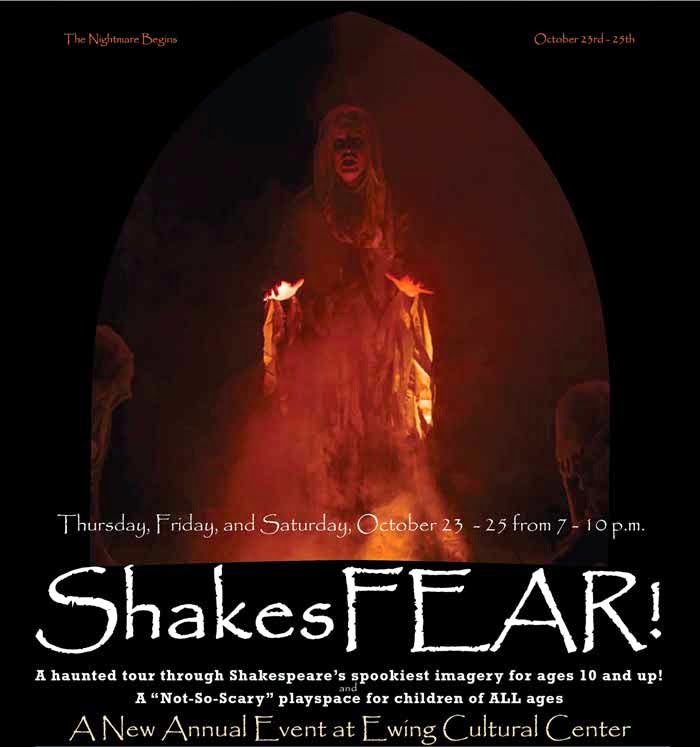 ShakesFear is what the Illinois Shakespeare Festival is calling its version of a haunted house. They'll have local actors portraying the ghost of Shakespeare and a host of his scariest characters in a Haunted Tour at Ewing Cultural Center or a milder choice called Juliet's Enchanted Courtyard for the fainter-of-heart (and the kiddies). Juliet's Courtyard will feature "Not-So-Scary" stories accompanied by Halloween shadow puppets, some hands-on fun with "autumn crafts" and Halloween tattoos that glow in the dark, and Halloweenie treats for sale in case you need a snack. The Haunted Tour is a half-hour experience led by the Ghost of the Bard. I'm guessing you might see a few witches, Mr. or Mrs. Macbeth, Hamlet's dad returned from the Great Beyond with revenge on his mind, Richard III and the parade of his victims, maybe even Iago or Tamora, Queen of the Goths. Something wicked this way comes... Juliet's Enchanted Courtyard costs one thin dollar, while the Haunted Tour is offered for $6. You can see the flyer for ShakesFear here.

ISU's School of Theatre and Dance offers another October option, this one the Pulitzer-Prize winning Water by the Spoonful by Quiara Alegria Hudes, directed by third-year MFA directing candidate Leah Cassella. Water by the Spoonful is the second of three Elliot plays written by Hudes, all three dealing with a soldier who has returned from Iraq and is trying to survive civilian life. Ronald Roman will play Elliot in this Spoonful, with Joey Banks, Eddie Curley, Anastasia Ferguson, Lauren Pfeiffer, Jaimie Taylor and Hananiah Wiggins as parts of his rag-tag network. Water by the Spoonful opens in Westhoff Theatre October 23, with performances through November 1.

And that's just the tip of the entertainment iceberg for October. Stay tuned for more creatures, goblins and ghouls as the month moves on.
Posted by JulieK at 2:20 PM