October 23 Openings, Part Three: WATER BY THE SPOONFUL at ISU 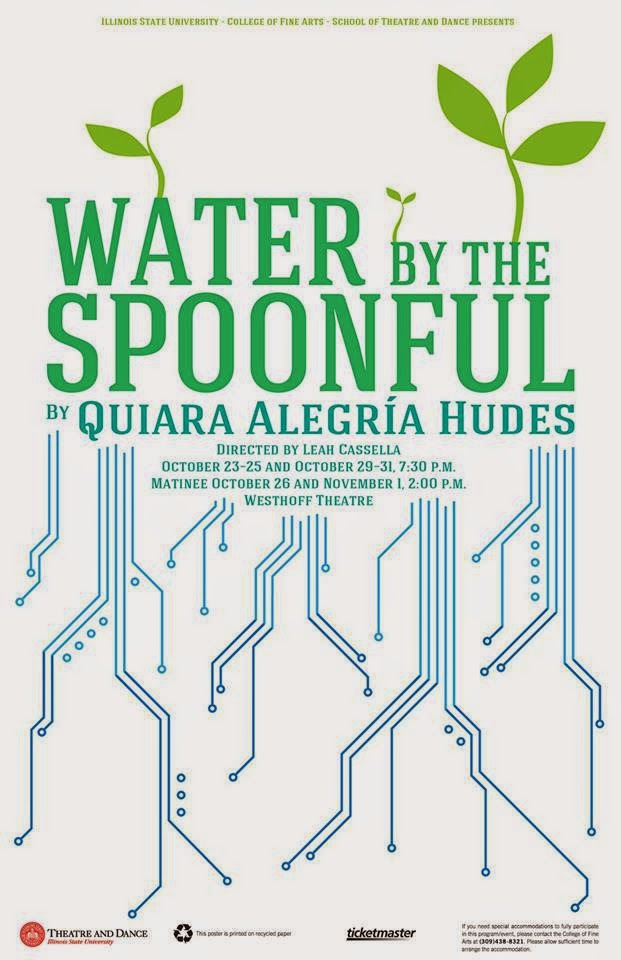 We have a multitude of entertainment options this week, with three good ones opening tonight. We've talked about ShakesFEAR!, a haunted house concept played around Ewing Manor and its grounds, and The Shape of Things, a provocative play by Neil LaBute that takes the stage at Illinois Wesleyan University through the weekend.

The third choice, Water by the Spoonful, which won the Pulitzer Prize for Drama for playwright Quiara Alegría Hudes, has a bit longer run than the other two. You can catch Water by the Spoonful at Westhoff Theatre tonight through November 1, with evening performances at 7:30 pm and matinees on the 26th and the 1st at 2 pm.

Water by the Spoonful is the second in a trilogy of plays by Hudes, all dealing with a veteran of the Iraq wars named Elliot. In the first play, Elliot, A Soldier's Fugue, itself a Pulitzer finalist, the title character was dealing with a family legacy of war and its echoes. In Water, family is also at the forefront, although this time it's Elliot and his cousin Yaz, as well as an online community of recovering addicts that begins to function like a family. The Happiest Song Plays Last, which premiered last year at Chicago's Goodman Theatre, brings back Elliot and Yaz as they struggle to find "peace and purpose in an ever-changing world."

The play takes place in North Philadelphia, where Ellot is trying to get back into civilian life while staying away from a dangerous addiction and some very bad dreams. He has a job -- at a Subway Sandwich -- and connections, to his cousin, Yaz, and the woman who raised him, who is dying. Addiction is also an issue for a small group of diverse online "friends" who gather every day to help each other stay sober. The connection between Elliot and the cyber-support group become clearer as the play progresses, delineating families and friendships bound and separated by blood and water.

Third-year MFA directing candidate Leah Cassella directs Water by the Spoonful for Illinois State University's Westhoff Theatre with a cast that includes grad student Ronald Roman as Elliot and Lauren Pfeiffer as Yaz. Jaimie Taylor will play Odessa, the leader of the addiction support group, with Joey Banks, Anastasia Ferguson and Hananiah Wiggins as the other members of her online family and Eddie Curley as someone from Elliot's past who haunts him.

Tickets are $12 for adults and $10 for faculty, staff, students or seniors. Tickets can be purchased at the College of Fine Arts Box Office, located in ISU's Center for the Performing Arts, from 11 am to 5 pm Monday through Friday, or by phone at 309-438-2535. For more information, click here or here.
Posted by JulieK at 3:39 PM