Fire up Netflix -- GILMORE GIRLS: A YEAR IN THE LIFE Is Here Friday! 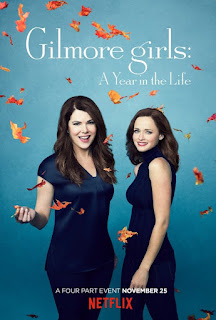 There have been hints, teasers, sneak peeks and all kinds of interviews to hype Gilmore Girls: A Year in the Life, the four-part look at where Lorelai and Rory Gilmore are now, eight years after we last saw the mother and daughter living their quirky, rapid-fire, off-beat lives in Stars Hollow, Connecticut.

All the anticipation pays off Friday, November 25, when all four 90-minute episodes drop on Netflix. When and how you watch the four pieces of this Gilmore puzzle are up to you, whether you're the type to binge all at once, watch one a day, or savor and watch five minutes at a time, rewinding to watch again and again, but they'll be there, on Netflix, waiting patiently, when Black Friday hits.

Amy Sherman-Palladino, who provided the original vision behind Gilmore Girls, the series, and her creative partner (and husband) Daniel Palladino are at the helm of Gilmore Girls: A Year in the Life, which means we can expect the characters to be the people we knew and loved between 2000 and 2007. Or at least 2006. Sherman-Palladino and Palladino weren't there for the 2006-7 season, so... That one is iffy. Anyway, Lauren Graham and Alexis Bledel are back as Lorelai and Rory, along with Kelly Bishop as Lorelai's acerbic mother, Emily. Edward Herrmann, the wonderful actor who played Lorelai's patrician father, passed away in 2014, but we are assured Richard Gilmore (and Herrmann) will be well represented as the Gilmores left behind grieve his absence.

Everybody has a different favorite among the friends, acquaintances and annoyances who surrounded the Gilmores. There is a whole lot of quirk in this ensemble. And most of them will be on hand in some capacity. That includes Scott Patterson as Lorelai's faithful love interest Luke, Keiko Agena as Rory's BFF Lane and Melissa McCarthy as Lorelai's pal Sookie, as well as Rose Abdoo (Gypsy), Aris Alvarado (Caesar), Jackson Douglas (Jackson), Chris Eigeman (Jason), Sean Gunn (Kirk), Emily Kuroda (Mrs. Kim), Todd Lowe (Zack), Vanessa Marano (April), Danny Strong (Doyle), Sally Struthers (Babette), David Sutcliffe (Christopher), Liz Torres (Miss Patty), Yanic Truesdale (Michel), Liza Weil (Paris) and Michael Winters (Taylor). Carole King and Sebastian Bach will be making appearances as well. And new faces will also be around, with Broadway stars Christian Borle and Sutton Foster showing up as part of a musical Stars Hollows Thanksgiving pageant.

All three of Rory's major boyfriends -- Dean (Jared Padalecki), Jess (Milo Ventimiglia) and Logan (Matt Czuchry) -- will be back in her life, although nobody knows yet which of them, if any, she ends up with. My guess is that she revisits old loves and sees she's better off alone, but I will have to wait till Friday to find out.

The other big mystery is what exactly the Magic Four Words will be. Amy Sherman-Palladino has said many times that she knew from the get-go how the show would end, and that would be with one four-word line that finishes the story of the Gilmore Girls. Nobody knows what those four words will be, however. A lot of guessers think Rory will tell Lorelai that she is pregnant ("I'm having a baby"?) but that just doesn't sound right to me. Whatever the Magic Four Words are, we'll find out on Friday, along with whether Luke and Lorelai last, how Emily moves on, and what Rory decides about her future.

You'll find Gilmore Girls: A Year in the Life on Netflix this Friday.