Plan Ahead: Plays and Ticket Info for 2017 Humana Festival of New American Plays 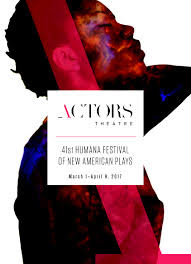 The 41st annual Humana Festival of New American Plays at Actors Theatre of Louisville has announced its lineup for spring 2017. The Humana Festival is probably the best-known New Play Festival in the country, launching works like D. L. Coburn's The Gin Game and Beth Henley's Crimes of the Heart in its early years and Gina Gionfriddo's Becky Shaw, Branden Jacobs-Jenkins' Appropriate and Lucas Hnath's The Christians more recently. Directors, producers, literary managers, scholars and a whole lot of theater critics attend every year to see what's new before the hottest Humana plays show up in major theaters from New York to LA and Chicago in between.

If you're interested in attending one of the four weekends between March 17 and April 9, ticket packages are now on sale. Options range from world premieres of three full-length plays in the First Look Weekend March 17 to 19 to four plays, a keynote address and a panel discussion during Discover Weekend March 24 to 26; a five or six play package plus "a presentation by a leader in American theatre and more" for Ovation Week March 31 to April 2; and a five, six or seven play package, including brand new ten-minute plays and a showcase written for Actors Theatre's "professional training company," during Encore Week April 5 to 7. There are special options for college and university theater faculty and students, audience members under 35, and industry professionals. Check out all the details here.

That last offering involves stories of inspiration and invention from Kentucky's "unsung dreamers," while the others cover an air guitar competition, babies and new moms, bomb shelters and the Cuban Missile Crisis, a lost episode of The X Files, and a wedding with a great deal of drama. If you're trying to figure out which is which, the titles of the plays should be a hint, but I encourage you to click on the links under those titles to get all the details.

But in the meantime... Ticket packages are now available, with "early bird" discounts in place if you book before February 10, 2017. Just a tip: If you want the full array of plays, including the ten-minute plays, on the last weekend, things tend to fill up fast, so you might want to act now.
Posted by JulieK at 3:33 PM