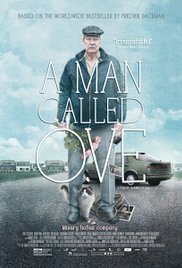 A sweet Swedish movie called A Man Called Ove, with the quintessential "Get Off My Lawn" cranky neighbor as the main character, comes to the Art Theater Co-op in Champaign tomorrow and Thursday. A  Man Called Ove puts the curmudgeon, a retiree and a widower whose main pursuit in life is enforcing neighborhood regulations, in conflict with a noisy, disorderly family that moves in next boor. Rolf Lassgård stars as Ove; he earned two Best Actor awards, one at the Seattle International Film Festival, for the role. A Man Called Ove will be screened at the Art Theater tomorrow at 6 and 8:30 pm and Thursday, November 3 at 7:30 pm.

Community Players brings out the puppets in November with Avenue Q, the irreverent Broadway musical that mixes Muppet-like characters with adult situations represented in songs like "It Sucks to Be Me" and "The Internet Is for Porn." George W. Bush was president when Avenue Q opened in 2003 and he got a mention in the song "For Now," which celebrates the temporary nature of problems and annoyances. The lyrics to that song have changed since Bush left the presidency in 2009, including a Donald Trump reference earlier this year. No word on whether the Community Players cast will sing about Trump being only "For Now," but we can hope. Brett Cottone directs a cast that includes Aaron Wiessing as Princeton, the puppet who moves to Avenue Q and meets his neighbors, human and puppet alike, and Erin Box as Kate Monster, his love interest. Avenue Q opens at Community Players with a preview performance on November 3, with performances continuing through November 20. For information, click here, or to purchase tickets, click here.

Harold Pinter's The Homecoming, a creepy play from 1964 about a malevolent family and the son (and his wife) who visit, comes to Heartland Theatre beginning November 3. The last time I reviewed The Homecoming, I called it "a surreal domestic dumping ground." That's as good a description as any, I suppose. Since then, I've learned that Pinter thought it was a feminist play, while I fall more on the side of those who think it's really, really misogynistic. If you're a Pinter fan, you'll probably want to decide for yourself if the sole female character, Ruth, represents female power, a combination of the Madonna and the whore, or she's just a "disgusting, distinctively masculine, sexual fantasy." Sandra Zielinski directs a cast that includes guest actor David Kortemeier, who has played many roles for the Illinois Shakespeare Festival and last appeared at Heartland in Cat on a Hot Tin Roof in 1991. After a Pay What You Can Preview on Thursday, November 3, The Homecoming will run till November 19. For showtimes, check this link. 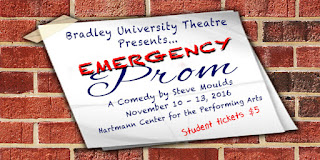 Emergency Prom will give freshman actors at Bradley University a chance to strut their stuff from November 10 to 13 at the Hartmann Center for the Performing Arts. And when I say "strut their stuff," I mean swaying to "Stay" or doing a little Bump N' Grind or whatever else was in fashion with outsiders in 1994. That's the premise of the play -- a group of not-exactly-popular kids in 1994 decide that last weekend's prom was so terrible that they need to stage a do-over, a new prom, an Emergency Prom. Check out the details here. 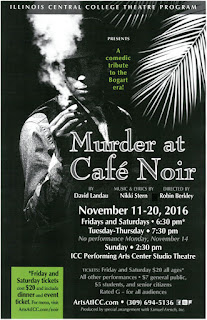 Arts at ICC presents David Landau's Murder at the Cafe Noir beginning November 11. As you might expect from the title, there are mysterious doings afoot in this play, involving a hard-boiled PI named Rick Archer. If you know your Bogart movies, both pieces of that name will sound familiar. Murder at the Cafe Noir is part Casablanca, part Maltese Falcon, and part Choose Your Own Adventure, with audience interaction to decide what Rick should do. If you're interested in seeing Murder at the Cafe Noir at ICC, pay special attention to the times of performances. Fridays and Saturdays, the curtain is at 6:30 pm, Sundays it's at 2:30 pm, and Tuesday, Wednesday and Thursday, the show opens at 7:30 pm. 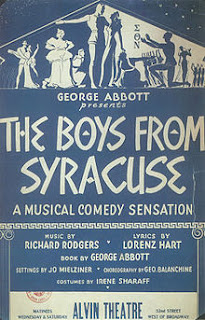 When you think of songwriters Richard Rodgers and Lorenz Hart, something like "My Funny Valentine," "Blue Moon" or "Bewitched, Bothered, and Bewildered" may be the first song that comes to mind. But the Rodgers and Hart score for The Boys from Syracuse is pretty swell, too. This musical version of Shakespeare's Comedy of Errors has "Falling in Love with Love," "This Can't Be Love" and "Sing for Your Supper," songs which were popular at the time and are still popular enough to show up often in revues and concerts. George Abbott directed the first Broadway production in 1938, with Eddie Albert starring as Antipholus of Syracuse. (That's the poster you see at left.) Classic material with a sparkling score is perfect for Illinois Wesleyan University's School of Theatre Arts and its talented students, and also perfect for IWU Associate Professor Scott Susong, who directs the production opening November 15 at the Jerome Mirza Theatre inside MacPherson Hall. Susong's cast includes Conor Finnerty-Esmonde and Tim Foszcz as the two Antipholi, Eli Miller and Kenny Tran as their identical twin servants, both named Dromio, Jackie Salgado as Adriana, who is married to the Antipholus from Ephesus but mistakes his twin bro for her husband, and Yuka Sekine as her sister, Luciana. The Boys from Syracuse will play at IWU for six performances between the 15th and the 20th. For more information or to reserve tickets, contact the School of Theatre Arts box office at 309-556-3232.