Join the fun at IT'S A WONDERFUL LIFE, A LIVE RADIO PLAY at ISU CPA Dec 2 to 9 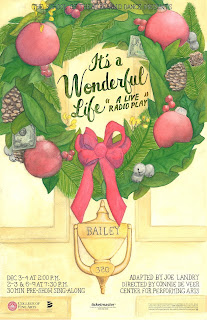 If you've already chosen what you're doing December 1, you may want to consider December 2. That's the day Illinois State University's School of Theatre and Dance offers a rarity -- not just a show with a holiday theme, but a show with performances in December. Since ISU's academic calendar doesn't usually go very far into December, they don't usually schedule performances then, either. But this year...

This year, ISU professor Connie de Veer is directing It's a Wonderful Life, a Live Radio Play, a stage adaptation by Joe Landry from the famous Frank Capra movie that shows all the action as if it were happening in a radio studio in the 1940s. Most of us weren't around to see how radio put on its plays back then, but if you attended A Prairie Home Companion or watched Remember WENN or the radio play episode of Frasier, you've seen actors dropping pages of their scripts in front of standing microphones, switching from one character to the next while the sound effects operator rattles sheets of tin and pops balloons to sound like gunshots.

To see the chaos of a what purports to be a live broadcast adds a fun dimension to the sweet, heartwarming story of George Bailey, the regular guy in Bedford Falls who thinks his life isn't worth anything until an angel intercedes and shows him otherwise on Christmas Eve.

For the ISU production, the cast includes William Olsen as George Bailey; Sarah Seidler as his wife, Mary; Jack VanBoven as angel Clarence as well as Uncle Billy; Breeann Dawson as Violet and little Zuzu; Mark de Veer as mean Old Man Potter along with Gower and Joseph; Marixa Ford as Mrs. Hatch, the stage manager, the Foley artist and the pianist; Everson Pierce as Pete, Burt, Ernie and Sam W.; Jacob Artner as the announcer, Mr. Welch, Martini, Tommy and Harry; Gina Sanfilippo as Ruth and Matilda, and Becky Murphy as Janie, Sadie Vance and Rose Bailey.

According to Connie de Veer in an interview with ISU News, these ten actors will "play all the roles, do all the sound effects, and even present a preshow with holiday songs and an audience sing-along!"

It's a Wonderful Life, a Live Radio Play opens Friday at the ISU Center for the Performing Arts with a performance at 7:30 pm, followed by 7:30 performances on December 3, 6, 7, 8 and 9, and 2 pm matinees on Saturday the 3rd and Sunday the 4th. The December 9th evening performance includes special alumni events including a preshow reception, Christmas Carols, a performance by the ISU madrigals and even an appearance by Reggie Redbird. If you're an alum and you want to participate, you are asked to purchase your tickets before Friday, either by calling Alumni Relations at 309-438-2586 or checking out this link.

For all other performances, tickets are available in person at the Center for the Performing Arts box office between the hours of 11 am and 5 pm Monday through Friday, by calling the box hours during those hours at 309-438-2535, or online through Ticketmaster.com.