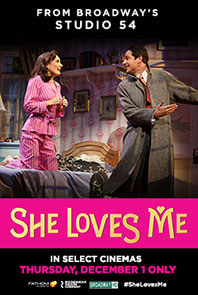 She Loves Me, the Bock/Harnick/Masteroff musical that has landed at the top of musical lovers' Best Ever lists since it first opened in 1963, was revived for what was pretty much an all-star production directed by Scott Ellis under the auspices of Broadway's Roundabout Theatre Company last year. The show was nominated for eight Tony Awards and took home one, for scenic designer David Rockwell, who created a beautiful little confection of a set that moved seamlessly from a twinkly Hungarian street to the inside of Maraczek's perfume shop, a small jewel box of a store. That lighter-than-air romantic atmosphere is essential for the show if it's to reflect the continental charm of Parfumerie, the 1937 Miklós László play it's based on, and the better-known movie The Shop Around the Corner that followed Parfumerie.

All three of those versions of the story follow the bumpy romance between Georg, a stand-up guy and employee at Maraczek & Co., and Amalia, who talks her way into a job there, too. Georg and Amalia clash almost from the moment she enters the store, both unaware that they've been corresponding with each other -- and falling in love -- as secret pen pals who call each other "Dear Friend" in their letters. Their coworkers make things even more complicated, as family man Sipos offers advice and sympathy, Ilona longs for love but has a tendency to pick the wrong men, Kodaly can't stop seducing women, wrong or otherwise, delivery boy Arpad is trying to move up in the world, and their boss Mr. Maraczek is getting crankier by the minute because he thinks his wife is cheating on him. He thinks it's with Georg. Silly Mr. Maraczek. Of course it's Kodaly. Look at his villainous mustache!

Like most Roundabout show, She Loves Me had a limited run. It closed July 10 after 132 performances. But that doesn't mean you can't see it. No, not in person. Laura Benanti (Amalia), Zachary Levi (Georg), Gavin Creel (Kodaly), Jane Krakowski (Ilona), Michael McGrath (Sipos), Byron Jennings (Maraczek) and Nicholas Barasch (Arpad) aren't getting together to perform it again anytime soon. One of their performances at Studio 54 was captured on film for Fathom Events, however, and December 1, that film will be screened in cinemas nationwide.

Although there is no Bloomington-Normal movie theater on the list, you do have options. The Savoy 16, just south of Champaign-Urbana, and the Springfield 12 will both be showing She Loves Me Thursday night at 7 pm.

With a song called "Twelve Days to Christmas," as well as frantic shopping, gift-giving and a little snowy romance, this She Loves Me is a perfect way to kick off your December.