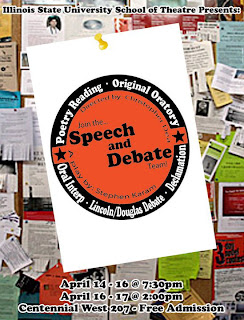 The production of Stephen Karam's "Speech and Debate" I saw last weekend was my first show in the classroom-style theater in the Centennial West building at ISU. I've seen listings before and wondered what these stripped-down shows could possibly be like, but "Speech and Debate" was the first one that actually got me over to CW 207 to see what was what.

So what was what? In this case, "Speech and Debate" is a script I already knew a bit, since I saw it at Urbana's Station Theatre, in a nifty production directed by Karen Vaccaro several years ago. It's a clever script, using forensics competition events, like Original Oratory and Lincoln-Douglas Debate, as a framework for the interactions among three high school students struggling to put together a speech and debate club. These kids are not unlike the Gleeks on "Glee" or the spellers in "The 25th Annual Putnam County Spelling Bee," since they all want to be somebody and find somebody, even as they feel like outsiders.

There's Diwata, who sits at home making vlogs, accompanied by a Casio keyboard, to share with the internet her angst and unhappiness over not getting cast in the school musical; Howie, who is proud that he's been out since he was ten, but maybe should stay away from chatrooms; and serious Solomon, who fancies himself a reporter, but keeps getting shut down from talking about the things he thinks are most important.

Karam's script is funny (especially when Diwata performs bits of the vanity project she's writing, a musical version of "The Crucible") and irreverent (with kids who are both more mature and way less mature than we might hope). And before it's done, "Speech and Debate" has looked at kids and how they deal with abortion, censorship, hypocrisy, sex, homosexuality, friendship, making mistakes, and the frustration of being completely misunderstood by even well-meaning adults.

CW 207 is a black box, or actually more of a black shoebox, since it's short but deep, and director Christopher Dea used the space nicely, with projections and a white board to bring in the "Speech and Debate" framework. Dea gave each of his actors an individual playing space, moving a basic black table and some chairs around when necessary to go from a classroom to a restaurant and vice versa.

Brody Murray made Howie vulnerable and believable, and Patrick Riley channeled his inner nerd to give Solomon a self-righteousness and awkward bravado that really defined him. As the third member of this little triumvirate, Taylor Wisham showed off a mischievous smile and fresh moves, making Diwata funny and sad as well as her own person.

CW 207 was a bit stuffy and a lot crowded, but I will definitely try to get back to see more of ISU's black shoebox productions. This is more likely the sort of theater ISU grads will be making when they leave -- basements, old churches, a room in a community center -- so it's good practice, to see what kind of story you can tell when you don't have all the technical wizardry to rely on. And that works just fine for a story like "Speech and Debate."

SPEECH AND DEBATE
By Stephen Karam