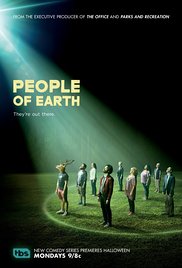 There's a nice synchronicity in the fact that the new TBS show People of Earth starts tonight, since its plot revolves around people who think they've been abducted by space aliens. There's even a short video teaser for the show that jokes about Halloween and alien costumes.

The premise of People of Earth is pretty easy to summarize, what with Wyatt Cenac playing a journalist who goes to a support group meeting of alien abductees (they prefer to be called "experiencers") ranging from a sheep farmer to a postal worker and their group leader (played by the always welcome Ana Gasteyer) who got the space at the church where the Starcrossers group meets. Cenac's Ozzie Graham is our entry into this world and he is sympathetic and skeptical enough to pull us right in. Well, he's skeptical at the start, anyway. His descent into "experiencer" is part of the fun.

People of Earth is definitely off-kilter and amusing, especially when the plot takes twists you don't necessarily expect, like the fact that the people in the group are not just delusional weirdos. When we learn, about halfway into the pilot, that the aliens are real, things get even funnier, but in a sweet, loopy way that is very appealing. It's nice to take a pass on gross-out humor for once. This humor is character-based, even alien-character-based.

Make no mistake: The aliens are a big part of the humor. There's a small gray one with a big head, a green, reptilian one, and a taller, blond, Nordic type with great hair. That last alien looked to me like Legolas, even though the people in the show described him as a Ryan Gosling type or a young Paul Newman. Come on! He's totally Legolas with a slight Swedish accent. I would accept Alexander Skarsgård, given the accent, but nobody mentioned him, either.

But the important thing is not what they look like or sound like, just that they are hilarious in a sly sort of way as they bicker amongst themselves and take potshots at how stupid humans are. I can't wait to see more of them find out what their mission is and what they want with the specific people in the Starcrossers.

The pilot episode has been available on Youtube for a week, but its first outing on TBS will be tonight at 9 pm Eastern/8 Central, followed by a second episode titled "Sponsored By."  Beam me up, Legolas Skarsgård!
Posted by JulieK at 5:02 PM