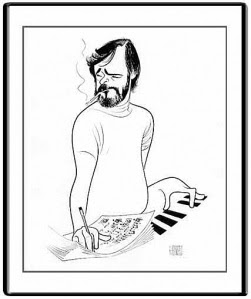 Stephen Sondheim's 80th birthday is still two days away, but there are so many things happening to celebrate it that I thought I would put out an all-points bulletin just so those who are interested don't miss anything.

First up, starting at 10 am Central Time on the 22nd, his actual birthday, there's Wall to Wall Sondheim, a 12-hour webcast marathon from SymphonySpaceLive.org. They're offering every single performance from the 2005 concert celebrating Mr. Sondheim's 75th birthday. Playbill has the whole schedule, but you'll tune in here.

Locally, Illinois Wesleyan is performing Passion, one of Sondheim's more controversial pieces, April 6-11. It's about Fosca, a painfully unattractive woman who feels very deep passion for Giorgio, a good-looking but somewhat shallow soldier who is already attached to gorgeous Clara, who is married to someone else. Will Fosca's overwhelming love be enough to convince Giorgio to return her feelings? Find out at IWU's McPherson Theatre in a couple of weeks, with Sarah Bockel as Fosca, Alex Pagels as Giorgio and Maia Diaz as Clara. The link for tickets is at left.

Further afield, the BBC will be honoring Sondheim in broadcasts from Monday the 22nd to Friday the 26th. Their press release tells us: "In the week of his 80th birthday, Broadway legend Stephen Sondheim discusses his life and work with Donald Macleod, in this week's Composer Of The Week offering." For more information, see their site.

Next is something from The Sondheim Review, a lovely little publication devoted to the works of the master composer and lyricist. Here's what they had to say:

A Little Night Music in Paris

As many of you know, the first ever Parisian production of A Little Night Music played several performances in February of 2010. It starred Leslie Caron and Greta Scacchi at Théâtre du Châtelet. Good news: It was recorded and will be re-broadcast on the internet on Wednesday, 24 March 2010 at 8:00 pm (20:00 hours) local time in Paris. Now that Daylight Saving Time has kicked in stateside, that means 3:00 pm New York time that same day. (But re-check that time for yourself, just to be sure.) Here's the link.

To listen to the broadcast at that time, a listener should select écouter le direct on the left-hand side of the screen.

Happily, that broadcast will be archived for your listening convenience in their archives for 30 days. To listen after the initial broadcast, listeners should instead select concerts à la réécoute on the left-hand side at the above link.

The Sondheim Review is also offering non-subscribers a peek at their interview with Angela Lansbury from earlier this year here.

Ongoing on Broadway (if you're planning a trip) are A Little Night Music with Catherine Zeta Jones and Angela Lansbury, West Side Story with the Sharks speaking (and singing) in Spanish, and a new revue called Sondheim on Sondheim, with the legendary Barbara Cook leading the cast in a limited run through June 13.

Although I'm guessing that most of us missed the 80th birthday concert at Avery Fisher Hall in New York City last week, we can hope it, too, gets its own cd or DVD. Until then, we'll have to enjoy Stephen Holden's review in the New York Times.

My friend Jon has offered two additions to this piece: 1) The production of A Little Night Music discussed above (the one with Catherine Zeta Jones) will get a cast recording from PS Classics in collaboration with Nonesuch, and is available for pre-order now, and 2) Anyone Can Whistle is coming up at New York's Encores in 3 weeks, with the pretty-much-perfect Sutton Foster, Donna Murphy, and Raul Esparza in the leads.

And another addition: While I was out and about today, I saw a poster for Side by Side by Sondheim at Community Players March 25-27, 2010. That's a revue featuring songs from A Funny Thing Happened on the Way to the Forum, A Little Night Music and other Sondheim shows. Click here to buy tickets.
Posted by JulieK at 2:25 PM