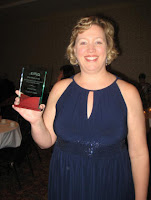 Congratulations to Normal's own Laurie Larsen, who just won an Eppie Award, handed out March 6th in New Orleans at the Electronically Published Internet Connection (aka EPIC) Conference. Laurie won for her book, Preacher Man, published in January 2009 by Wild Rose Press. The Eppies are awarded to the best in electronically-published books of all genres, and Laurie's book was honored as the Best Metaphysical and Spiritual Romance of 2009.

Laurie's other titles include The Chronicles of Casey V, OR Mental Ramblings of the Most Awesome Summer of My Life, a Young Adult romance also from Wild Rose, published in July, 2009.
Posted by JulieK at 1:06 PM