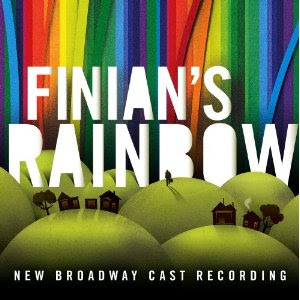 When Encores announced "Finian's Rainbow," a Broadway hit from 1947, as part of its 2009 season, I wasn't really sure what to think. Joy for an exciting new revival? Horror that they'd unearthed that old chestnut? Not really either. More curiosity, I guess.

"Finian's Rainbow" was a bit of a curiosity, even in 1947, mixing an old Irish gent with a stolen crock of gold, the leprechaun he stole it from, a mysterious girl who dances instead of talking and a bunch of poor sharecroppers in "Missitucky" who are looking to better their lives with a better brand of tobacco.

Like many people, I'd never seen a stage production of the show, and my only knowledge of it was the 1968 movie version, directed by a young Francis Ford Coppola. (Let's be honest here. It's a Fred Astaire movie. Of course I've seen it. I mean, duh. It's FRED ASTAIRE. Anyone who knows anything about me knows how I feel about Mr. Astaire.)

My main recollection of the film was Fred being charming and doing his best not to get sucked down by the creepiness of the subplot involving Keenan Wynn in blackface. But that's the thing about "Finian's Rainbow" -- the blackface that looks bizarre and horrific to us now was actually part of its message of racial tolerance. It's the bigoted cornpone senator who gets turned into a black man to show him what the racism he's been spouting feels like. It's still blackface, however. And that was problematic for me, even in 1968.

The weird thing is that I didn't remember much of the score from the Coppola movie, even though he included most of it. I'm used to Hollywood gutting the songs when they put stage musicals on screen, but "Finian's Rainbow" got a different treatment, what Coppola called the "road show" approach, where it played as much like a night out at the theater as possible. In fact, everything but "Necessity" seems to be there.

So how is it possible I had no memory of "Old Devil Moon," "Look to the Rainbow," "How Are Things in Glocca Morra?" or "When I'm Not Near the Girl I Love" as being part of "Finian's Rainbow"?

When I first played the cast recording from the Encores production that moved to Broadway, I kept saying "THAT'S from 'Finian's Rainbow'?" every few minutes. I think the difference is in who's singing these gorgeous songs and the overall style.

The movie has a 60s hippyish sort of feel in some places, especially when Petula Clark gets all folk-pop on "Look to the Rainbow" and when Dorothy Jeakins' costume design pulls in that seriously hideous wedding ensemble. I don't know who thought a veil made of fishnet trailing little daisies was a good idea. It wasn't.

And then there's Tommy Steele. Again, I don't know who thought it was a good idea to cast a cheesy pop, almost Music Hall performer like Steele as the show's sweet little leprechaun, but he is completely at odds with the more down-home, laid-back style of the rest of the film.

In contrast, the Broadway revival went back to 1947 in terms of the look and the sound. So Kate Baldwin's clear, bright soprano hits the perfect mood, as does Cheyenne Jackson's smooth baritone. Together, they make "Old Devil Moon" swoony and sexy and just plain beautiful. Sweeping me off my feet? You bet.

Kudos to Warren Carlyle, who directed and choreographed this new "Finian's," and also to musical director Rob Berman, for sticking with the 40s feel and making it sound so good. Carlyle's decision to cast a black actor as Senator Rawkins' double (avoiding the blackface problem) is also most welcome.

The funny thing is that even "Necessity" and "The Begat," the most old-fashioned songs in the score, sound fresh and new here. Even the "Dance of the Golden Crock," a total snoozefest of easy listening in the movie, is fun and engaging performed as a harmonica instrumental on this fizzy, fabulous cast recording.

It's tough for me to put aside my feelings for Fred Astaire and recognize that someone else fits the role better, but Jim Norton really does make a better Finian. I still love Fred, but Norton's "When the Idle Rich Become the Idle Poor" is more mischievous, more fun and more Irish.

Meanwhile, Christopher Fitzgerald's Og beats Tommy Steele's in so many ways it's not even funny.

When this new "Finian's" closed in January, I was dismayed that I hadn't managed to get to New York to see it in time. The good news is that PS Classics and executive producer Tommy Krasker recorded it for posterity. Krasker has not only brought the score to life, but he's included enough dialogue to make the story work and added a terrific little booklet offering pictures, complete lyrics, a synopsis and notes about the history of the show. PS Classics sweats the details and I couldn't appreciate that more.

So, no, I didn't get to see the revival. But I know what it sounded like, what it looked like and, yes, what it felt like. This cast recording is just that good.

To order the cd -- and you really should order this cd -- you can visit PS Classics. You might also want to take a look at some of their other offerings, including "Nine" done right and lesser-known gems like "Kitty's Kisses" and "Fine and Dandy." Yes, it's true. I love PS Classics. But they are completely deserving of that love.
Posted by JulieK at 9:57 AM