How Well Does "History of the American Film" Play in Urbana? 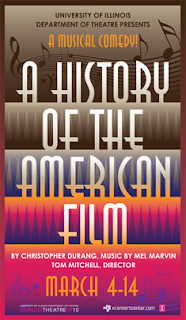 This review ran originally in the Champaign News-Gazette on March 7, 2010.

Just in time for the Oscars, the U of I Department of Theatre brings us Christopher Durang’s “A History of the American Film,” a zany, kicky look at how the movies have informed our lives.

There are no real characters or plot in this frantic little play, as Durang goes for archetypes instead, sending ingénue Loretta (named for Loretta Young), tough guy Jimmy (a Cagney type), aw-shucks Hank (based on Henry Fonda) and bad girl Bette (for Bette Davis) spinning through a whirlwind of Hollywood genres and clichés. His script includes riffs on Warner Brothers’ hardboiled crime dramas, a Busby Berkeley musical, screwball comedy like “My Man Godfrey,” “The Grapes of Wrath,” “Citizen Kane,” “Casablanca,” some basic 50s atomic-bomb sci fi, “Psycho,” and eventually “Forrest Gump.”

There’s even a little song and dance, just to keep things moving and create the proper cinematic feel. So we have “Shanty Town Romance” instead of “As Time Goes By,” and “We’re in a Salad” instead of “We’re in the Money.”

Tom Mitchell seems to have cast actors who could sing rather than people who resemble the movie archetypes Durang has set down, which may be a problem for those who know their movies well. It’s just a little unsettling when this Loretta (Neala Barron) is closer to an Eve Arden or Alexis Smith than a standard Hollywood ingénue, while Eve (Lena Dansdill) actually looks a bit like Bette Davis, and Bette (Amanda Cabrera) is more the Norma Shearer type. Go figure.

Still, there’s good energy throughout the cast, and Barron and her frequent scene partner, Marty Scanlon, who plays Jimmy, sound great on their “Shanty Town” anthem. Jonathan Butler-Duplessis is also in fine voice, and he has fun with a string of ethnic stereotypes, from the black maid and piano player to Indian chief and Japanese butler, all of whom illustrate just how rotten the movies were to minorities.

Others of note include Christopher Sheard, who is properly folksy for Hank in the first half, and then pretty darn good when his character takes a “Psycho” turn after intermission; Dansdill, peppy and fun as various wise-cracking blondes reminiscent of Joan Blondell and Ginger Rogers; and Cabrera, who is consistently funny as bad, bad Bette.

There is actually a method to all the madness – Durang seems to be pretty clearly commenting on how we all use movies as our Fantasyland when the news is bad, times are tough or we can’t face reality. I’m not sure that point really comes across in this particular production, although things get so grim by the time Hollywood hits the 60s that I may be underestimating the audience and their perceptions.

Jack Magaw’s scenic design looks nifty, framing a mostly bare black stage with telescoping proscenium arches and then adding drops and set pieces as needed, while Jessica John’s costumes are striking, moving from black and white to pale green for the Salad girls and bright scarlet for Bette when she rolls into a Marilyn phase.

I found D.M. Wood’s aggressive lighting design less successful, mostly because it was often hard to see people’s faces, and Doc Davis’ sound design came off a bit too loud for my taste.

If you are a movie-lover, I have a feeling you will be happy to ignore the deep shadows and blaring music and follow along with the ending prayer. Say it with me: Our Father, Who Art in Heaven, Give Us This Doris Day…
Posted by JulieK at 12:39 PM