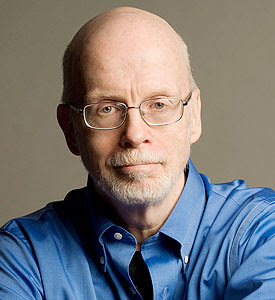 I just got back from the Humana Festival of New American Plays and I am buzzing with things to write about. Unfortunately, I am also buzzing with deadlines and projects I put off till after Humana. So that means I will get to reviews of the Humana shows ASAP, but for today, I am going to share the press release from the ATCA about the Steinberg prize:

The American Theatre Critics Association (ATCA) has named Bill Cain’s “Equivocation” winner of the 2010 Harold and Mimi Steinberg/ATCA New Play Award, which recognizes the best scripts which premiered professionally in 2009 across the U.S., but outside New York City. No play is eligible if it goes on in the same year (2009) to a production in New York.

The Steinberg/ATCA and two additional citations were presented March 27 at Actors Theatre of Louisville during the Humana Festival of New American Plays. Cain received a commemorative plaque and a cash prize of $25,000. The two citations, including plaques and $7,500 each, went to “Time Stands Still,” by Donald Margulies, and “Legacy of Light,” by Karen Zacarías.

“The long-standing partnership between the Harold and Mimi Steinberg Charitable Trust and the American Theatre Critics Association has recognized some of today's greatest writers, and helped identify the great playwrights of tomorrow,” said trustee Jim Steinberg. “We're delighted to help support the unique telling of tales on the American stage.”

Critic Misha Berson of The Seattle Times called it, “compelling fiction in its rich marbling of literary lore and a timely, astute portrayal of religious bigotry, political exploitation of terrorism and other burning matters. An erudite historical drama demanding three hours of your time, and many of your brain cells, is a rare property in the American theater. And in this case, a welcome one.”

Zacarias’ “Legacy of Light” was described by one critic as “an intellectual joyride” examining two women, an 18th century scientist and a 21st century astrophysicist, balancing their yearning for professional fulfillment and the complications of impending motherhood. The work premiered May 8, 2009, at Arena Stage in Washington, D.C.

“Time Stands Still” portrays married journalists trying to recover from the emotionally and physical damage wreaked during their coverage of the war-torn Middle East. They must weigh their socially important role against the seemingly irreconcilable quest for a normal life back home. It premiered at the Geffen Playhouse in Los Angeles on Feb. 11, 2009, and is also just completing a run in N.Y.

"Once again, America’s regional theaters from Sarasota to Seattle proved themselves as important a source for vibrant and important new work as the five boroughs of New York City,” said Hirschman. “The nominated plays reflected an encouraging range of well-known names and newcomers, young voices and mature talents, the mainstream drama and the surreal. Themes of integrity and responsibility suggest that issues facing humanity one, two, even three centuries ago, still echo for the 21st Century with a deafening resonance.”

The New Play Awards began in 1977, when ATCA started to cite each year one new play produced outside New York City. In 2000, the award was renamed to recognize the Steinberg Foundation’s generous annual gift, which was raised to $40,000 in 2006. Honorees have included Lanford Wilson, Marsha Norman, August Wilson, Jane Martin, Arthur Miller, Mac Wellman, Adrienne Kennedy, Lynn Nottage, Horton Foote, Moises Kaufman and Craig Lucas. Last year’s honoree was E. M. Lewis for “Song of Extinction.” Each year’s winning plays are chronicled in The Best Plays Theater Yearbook, edited by Jeffrey Eric Jenkins, alongside the 10 best plays produced that year in New York City. For a complete list of the 83 plays cited from 1977 through 2009, go to www.americantheatrecritics.org, under Awards.

The Harold and Mimi Steinberg Charitable Trust was created in 1986 by Harold Steinberg on behalf of himself and his late wife. Pursuing its primary mission to support the American theater, it has provided grants totaling many millions of dollars to support new productions of American plays and educational programs for those who may not ordinarily experience live theater.

ATCA was founded in 1974 and works to raise critical standards and public awareness of critics’ functions and responsibilities. The only national association of professional theater critics who work for print, broadcast and online media, ATCA is a national section of the International Association of Theatre Critics, a UNESCO-affiliated organization. For more information on ATCA, visit www.americantheatrecritics.org.

ATCA also presents the M. Elizabeth Osborn Award, honoring emerging playwrights, and the Francesca Primus Prize, funded by the Francesca Ronnie Primus Foundation and honoring female artists who have not yet achieved national prominence. Annually it makes a recommendation for the Regional Theater Tony Award presented by the American Theatre Wing/Broadway League and votes on inductions into the Theater Hall of Fame.
Posted by JulieK at 2:00 PM