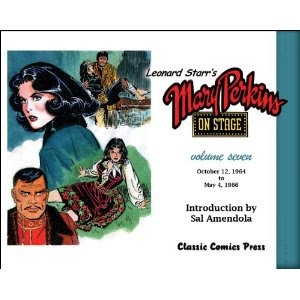 My friend Jon Alan Conrad guest-blogs for me again, this time about "On Stage," something we both find fascinating. Enjoy!

I suspect that our current way of getting the daily news has made all this a thing of the past, but: Back in the days of children reading the funny papers in the morning (especially on Sundays, when the strips were longer and in color), it didn't take long to discover that along with all the actual funny ones (whether your taste ran to "Peanuts" or "Pogo" or "Miss Peach") there were the non-funny ones that kids didn't care about -- that is, not failed attempts at comedy, but serious and realistically drawn continuing stories about adults, with names like "Judge Parker" and "Rex Morgan M.D." (both of which, I find, are still going!)

But there was one that was both a grownup serial drama and thoroughly entertaining (at least to me): ON STAGE (its name later extended to "Mary Perkins: On Stage"). Its main character was Mary Perkins, who came to New York straight from college when the strip began in 1957, eager for an acting career. She succeeded, becoming a respected actress on stage and screen (the live TV specials of the period, an occasional movie), but not a superstar. The dialogue had wit, and the story lines were varied and surprising. (And fascinating, to a boy just discovering an interest in theater and acting.) My parents concurred that this one was a cut above the others.

And rediscovering it decades later, I see that we were right. It really was that good! Classic Comics Press has been reissuing the strips in book form, and Volume 7 has just made its appearance, joining the six previous ones on my shelf. Each paperback book is in wide format (close to letter-size, sideways), with three daily strips or one Sunday strip (the latter in black and white) to a page, and about half a dozen stories (adding up to somewhat more than a years' run) to a volume.

Searching online, I'm learning that professional cartoonists are in awe of the drawing -- and rightly so, without doubt. Even I, no visual-arts expert, can tell how deft Leonard Starr was at framing and composing the action. But what I love most, and always have, is Starr's ear for dialogue and situation, the offhand, self-deprecating way people actually speak, with shots of humor in passing. Some of the stories here feel surprisingly real, others veer into unabashed melodrama, but they're all addictive fun to read.

This volume catches Mary in midcareer, from October 1964 to May 1966 (the strip ended in 1979). The book happens to begin and end with stories a touch more politically oriented than usual, with Mary invited behind the Iron Curtain on a supposed cultural exchange (discovering too late that nefarious doings are afoot), and then her husband, photojournalist Pete Fletcher, taking an assignment in Vietnam that turns into a daring rescue mission. In between, we often see Mary without Pete, moving from one job to the next.

That marriage, by the way, is one of the most interesting and un-dated elements in "On Stage." Starr didn't string out the suspense for years, as many serial writers prefer to: the wedding (preceded by a sparkling, flirtatious courtship) happened only two years into the strip. Mary and Pete keep their names and careers, the possibility of children never arises. and there's a touch of believable friction as they adjust to married life. Early on, Mary asks that Pete not accept foreign assignments any more, to maximize their time together; after initially agreeing to what seemed a reasonable idea, he finds the arrangement restrictive and unfair, and they renegotiate, acknowledging that in fact their careers will sometimes keep them apart. The attractive people whom actresses and photographers are likely to encounter do turn up, but handled with an adult understanding and lack of jealousy. In fact, the present volume contains the first hint that anything might be fundamentally amiss between Mary and Pete, and again it's a small but real matter that both are intelligent enough to understand and deal with: that after a few years of marriage they are taking each other for granted and becoming a bit neglectful.

In general, then, the big drama in "On Stage" tends to happen to others. There are a few continuing characters who pop up now and again -- Mary's seen-it-all agent Nat, the dashing Johnny Q who may or may not have criminal connections, sardonic housekeeper Daisy, mysterious "man of a thousand faces" character actor Maximus -- but mostly we meet a new batch of professional associates each time Mary undertakes a new role.

The present volume has the usual variety of good story ideas (I was happy to see Mary flying to the Caribbean to play Miranda in a telefilm of "The Tempest," with Maximus as Caliban having a life-changing experience), but if you're new to "On Stage," I might suggest beginning with an earlier volume and working your way through. Vol. 1 has the start of it all, with Mary trying to catch her first break, getting a temp job as a coat-check girl, and meeting Pete when he is assigned to do a story about her. Vol. 2 has Mary doing a season of summer stock (complete with brilliant but tragically self-destructive young male star, a la James Dean), dealing with a too-good-to-be-true offer of Hollywood stardom, and accepting Pete's proposal only to see him assigned overseas. In Vol. 3, Mary and Pete are reunited (after he is released from behind the Iron Curtain) and married in Switzerland. Vol. 4 (probably my own favorite) has feisty ex-Follies-girl Daisy invading Mary's apartment to clean and cook, former child star Julep Tandy cutting herself loose from an overbearing mother, high adventure (including a baby!) on location in a Caribbean storm, and Johnny Q's infatuation with an abrasively untalented new chanteuse. And that still leaves the "Hamlet" for TV in Vol. 6, with an untried (even unwilling) Hamlet and some of my favorite self-critical lines for Mary (Ophelia, of course): "Want to know how much Shakespeare I've done? I played Rosalind in high school. Millions of girls have played Rosalind in high school!" (with, please note, no explanation of who Rosalind may be) and later, "I've still got the quakes about it... But then again, faint heart ne'er won fat part, so here goes nothing!"

And through it all, the Manhattan high life of yesteryear, snazzy restaurants (with gossip columnists lurking behind every fern) and classy nightclubs, all of them patronized regularly by our cast and all vividly brought to life by Starr's visual and verbal skill. Here's a chance to be part of that enticing scene, all these years later.

With all the film versions of vintage comics these days, why has "On Stage" been overlooked? Julie and I agree that in its own era, Mary Tyler Moore and James Garner would have been ideal casting for Mary and Pete. Now -- well, I'm thinking Anne Hathaway and Cheyenne Jackson, but am open to other ideas.