Nothing but Blue Skies for ISF "Tempest" 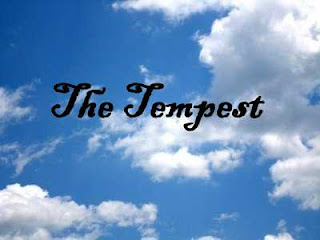 After several nights of thunder and lightning, the Illinois Shakespeare Festival production of William Shakespeare’s “The Tempest” opened under blue skies last night. The play isn’t called “Blue Skies,” yet that serene skyline seemed just right for this version of the play, directed by ISF Artistic Director Deb Alley and set on a magical golden O of a set designed by Fred M. Duer.

Duer used two golden Os, one as a doorway to exiled duke Prospero’s island refuge and one as an enchanted circle on the floor of the stage. The former was surrounded by azure skies and puffy white clouds, while the latter was filled with them. And the blue sky imagery didn’t stop there – it was painted right onto Gerson Dacanay’s Ariel and his spirit companions.

It made for some beautiful stage pictures, especially at the beginning, with rippling yards of fabric manipulated by Ariel & Co. to create the titular tempest. It’s clear from the beginning that this storm did not come from Mother Nature, but from the manipulations of a more earthly being called Prospero, bent on upending the ship carrying the brother who had stolen his dukedom, dashing the usurper and his compatriots straight onto Prospero’s shores.

“The Tempest,” widely believed to be Shakespeare’s last play, is about an aging man’s need for justice and the settling of old scores, but also about the redemptive value of forgiveness and love. As an island exile, Prospero has learned magic and tamed supernatural servants, making him much more powerful than when he was merely the Duke of Milan, yet he longs to return to that lesser place, to break his magical staff and throw away his books and go back to the pleasures of friendship and human contact.

Alley has streamlined Shakespeare’s text, which means things move quite quickly and smartly, but you also lose a little of the connection to Prospero in the first half when he isn’t around for long stretches. The love story – between Prospero’s daughter Miranda and Ferdinand, the son of the King of Naples, one of the people who washes ashore – also seems weakened here, since we don’t get a sense of how hard Ferdinand is willing to work to earn Miranda’s love hand with those scenes trimmed.

But the magic is definitely present, helped by that gorgeous set and a lovely array of costumes designed by Holly Cole, but also by some excellent performances.

David Sitler is strong and majestic as Prospero, especially in the second half, and he is very appealing with the big, familiar speeches, like “We are such stuff as dreams are made on” and “Now my charms are all o’erthrown.”

Gerson Dacanay’s Ariel is also right there at the top of the list; he dances and sings a little, but mostly he just inhabits the role of the airy sprite, and even in blue face, he gives Ariel a charming, lighter-than-air presence.

Caliban, Prospero’s other servant, is the opposite of Ariel in every way. He’s a deformed monster, the son of a witch who once inhabited the island, and he only learned to speak (or curse) when Prospero and Miranda taught him. As portrayed by Kareem Bandealy, Caliban is a bit of a devil, with red welts all over his torso and strange, crab-like appendages on his hands. Bandealy is excellent throughout, just crude and lascivious enough to make Prospero’s treatment of him seem somewhat reasonable. And I loved the way he used that golden crab claw.