The Twisted Saga of "In a Lonely Place" 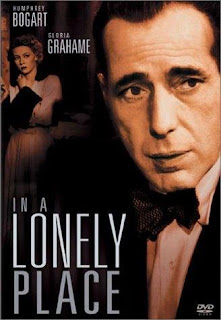 It’s curious to me that “In a Lonely Place,” the 1950 Humphrey Bogart film playing at the Normal Theater Saturday and Sunday, is considered film noir. Yes, there’s a murder, but the solving of it isn’t really part of the plot. Well, it’s tied up there at the end, but we don’t see any unraveling of any great whodunit plot, and the revealing of the culprit doesn’t contribute to any cynicism about the world or who’s in charge, in classic noir fashion. There’s no big conspiracy, no crime (except for that already-mentioned murder), no seedy henchmen, no double-dealing dame, no opportunity for the hero and his shady moral code to get beat down by baddies. Not even his apartment gets tossed.

There is some cynicism and moral ambivalence, but it’s mostly involved in Humphrey Bogart’s character, a Hollywood screenwriter with a drinking problem and a bad attitude. His agent has convinced him to try to make a comeback by adapting a popular novel for the screen, but our boy Dixon Steele (okay, he definitely has a noirish name) doesn’t want to bother reading the book. Instead, he takes home a hatcheck girl who’s already read it. He gets the basic plot from her, and then basically tells her to get lost. Unfortunately for both of them, she gets murdered on her way home from his apartment.

The police are immediately suspicious of snarky, uncooperative Dix, who doesn’t seem particularly upset that a girl he dismissed so easily got strangled and tossed down a canyon moments after leaving him. But a woman who lives in a nearby apartment, played by femme fatale favorite Gloria Grahame, gives him a solid alibi, even though she doesn’t seem at all sure whether he actually did commit the murder.

That’s the whole plot, really. Dixon Steele is cranky and unpleasant, his neighbor Laurel likes him for reasons we can’t fathom (well, he is kind of hot, being Humphrey Bogart and all, and in the movie, he’s also a semi-celeb, as a famous screenwriter and Hollywood insider), she pops up out of nowhere to tell the cops he couldn’t possibly have been the murderer, and then he continues to be so unpleasant that she starts to wonder if he did it, after all.

As opposed to most film noir, where a labyrinthine plot is king, I think I would call “In a Lonely Place” a character study, completely focused on Dixon Steele. Who is he? Is he violent? Or just a jerk? What does Laurel see in him? Is he worthy or capable of love? And what will eventually happen to him if he can’t control himself?

It’s compelling enough, but lacks the intriguing minor characters and dark humor that make other film noir pieces of that period stand out. I can understand why “In a Lonely Place” is a lesser-known Bogart, even though he turns in a terrific acting performance as the haunted, hopeless Dix.

The back story may just be the most interesting thing about “In a Lonely Place,” when you consider that it was directed by Nicholas Ray, the real-life husband of Gloria Grahame, and the two were breaking up while they were filming it. It was a stormy marriage, and they split up for good after he caught her in bed with his son – his 13-year-old son – from a previous marriage. Some ten years after “In a Lonely Place,” Grahame actually married the younger Ray when he was 23 and she was 37. Given all of that, it’s hard not to read a whole lot of subtext into the central couple’s also stormy love affair, but I shall try to refrain.

But if you go to see “In a Lonely Place” on the big screen in glorious black-and-white at the Normal Theater, you can draw your own conclusions about what was going on in the Roy/Grahame household.
Posted by JulieK at 9:08 PM