Summer Season at the Station Theater 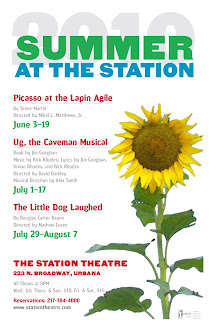 The summer season opens tonight at Urbana's Station Theater, with "Picasso at the Lapin Agile" first up.

"Picasso," a quirky comedy involving Pablo Picasso, Albert Einstein, and a few denizens of a bar in Paris, was written by comedian Steve Martin. The Station's production is directed by Mikel Matthews and runs June 3-6, 9-13 and 16-19, with all performances at 8 pm.

Next on the schedule is "Ug, the Caveman Musical," directed by David Barkley, with musical direction by Alex Smith. "Ug" features music by Rick Rhodes, lyrics by Jim Geoghan, Vivian Rhodes and Rick Rhodes, and book by Jim Geoghan. Geoghan's cavemen sing and dance as they invent romance, cooking and the concept of musical theater. Why not? Somebody had to.

At the end of July, the Station will present "The Little Dog Laughed," the snarky, cynical Douglas Carter Beane comedy about a movie star, the hustler he falls in love with, and just how fast his agent will dance to hide the fact that her client is gay. "Little Dog" was a hit on and off-Broadway, and it earned both the Best Play Tony as well as a Best Actress Tony for Julie White as the take-no-prisoners agent.
Posted by JulieK at 11:00 AM