My husband and I like to go out to an unusual movie on New Year's Eve. By unusual, I mean something a little different, a little out of the ordinary. Our choices have ranged from "Titanic" (a terrible idea for New Year's Eve, when the last thing you need to see is the hero turning into a Popsicle) to "Enchanted April" (all about rediscovering the joy in life, even inside marriage -- what a concept! -- plus we left Champaign's Art Theater to a softly falling snow that was quite romantic, making this one perfect for the bittersweet last day of the year.) 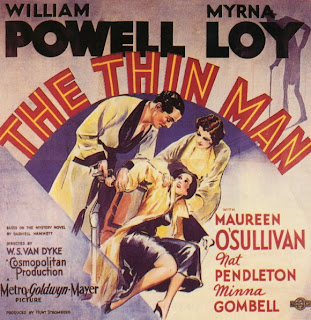 This year, I've chosen "The Thin Man," a romantic comedy/mystery classic playing tonight and tomorrow night at the Normal Theater. It's been a long time since I've seen "The Thin Man" and I'm not sure I've ever seen it on a big, beautiful screen like that. I love it for its portrayal of a married couple who are fizzy and romantic as well as smart -- they solve crimes together while never missing a chance to knock back a cocktail or two or three -- and for its lighter-than-air, irreverent tone.

"The Thin Man" does not refer to Mr. Charles, by the way. It refers to the missing person, an old friend (or possibly just an acquaintance) of Nick's. He's the guy who gets the puzzle going, as Nick tries to figure out what happened to this thin man, uncovering a murder or two and running into the thin man's daughter, played by Maureen O'Sullivan, whose children in real life include the actress Mia Farrow. You may've seen Ms. O'Sullivan as a mere slip of a girl in the old Tarzan movies or as a septuagenarian in "Hannah and Her Sisters." So feel free to watch "The Thin Man" and then look for "Hannah" so you'll know what she looked like 52 years later.

But the joy of "The Thin Man" is its careless, carefree charm, as we watch two wonderful movie stars sail through the plot with a sense of frisky fun. William Powell is elegant, tipsy and completely himself, while Myrna Loy is sharp as a tack as well as pretty darn slinky in her lovely satin gowns. How often do you get the chance to see witty romance and double entendre mixed with murder, high society, champagne and fabulous fashion? Somehow screenwriters Albert Hackett and Frances Goodrich and director W. S. Van Dyke hit just the right notes when they made "The Thin Man" and half of Hollywood would spend the rest of the 20th Century trying to copy it.

And that's why I'll be spending the first few hours of my New Year's Eve at the Normal Theater with Nick and Nora. And Asta, of course.
Posted by JulieK at 4:24 PM