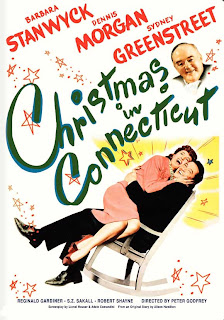 One of my favorites for the holidays, "Holiday Inn," showed up at the Normal Theater and on TV (AMC channel) last weekend. Now it's time for another of my favorites, the charming "Christmas in Connecticut," which hits AMC on Sunday and Monday.

"Christmas in Connecticut" is a lesser-known holiday gem than "Holiday Inn," but it went over well enough to spawn a remake. Still, it's the 1945 version, starring Barbara Stanwyck and Dennis Morgan, that deserves your attention. The 1992 TV movie, with Dyan Cannon and Kris Kristofferson? Just don't go there.

But let's not talk about that one. Let's go back to the '45 original, with a screenplay by Lionel Houser and Adele Comandini, based on a story by Aileen Hamilton. Its wartime setting informs the plot, about a magazine writer named Elizabeth Lane, played by Barbara Stanwyck, who is a bit of a know-it-all on paper. She writes about cooking and homemaking and all sorts of warm, fuzzy things. She's sort of the Martha Stewart of her time, with the addition of a made-up husband and a baby and cozy house in Connecticut. Emphasis on the "made-up" part. Our girl Elizabeth is a single city girl who can't even boil water. But then a heroic GI, one Jefferson Jones, played by the very handsome Dennis Morgan, decides that all he wants for Christmas is to spend his holiday leave with a real family like Elizabeth's. Except, of course, it isn't real.

This being the movies, Elizabeth can't possibly out herself as a fake, so she and her friends, including a chef played by the adorable S. Z. "Cuddles" Sakall, scramble to put together the elements -- home, husband, baby, delicious holiday feast -- to keep her image alive.

I love this movie. I used it as a starting point for one of my own books, "Fantasy Wife," where the Martha Stewart-like character (definitely fake, definitely know-it-ally) is not the heroine. Instead, it's her assistant, who has really been writing all her boss's how-to books, who gets involved with the guy, a busy executive who thinks a know-it-all is the solution to his childcare woes. Obviously, I took the idea (fake home-making expert) in a very different direction, and I didn't involve Christmas or a war hero, but my inspiration was my love for "Christmas in Connecticut."

One of the best things about the movie is the supporting cast, like Cuddles Sakall, with Sydney Greenstreet as Elizabeth's pushy publisher, Reginald Gardner as her unctuous faux-husband, and Una O'Connor as a helpful housekeeper. Barbara Stanwyck is warm and delightful, she has good chemistry with Dennis Morgan (who looks great in a uniform and gets to sing a little, too) and the movie works like a holiday charm.