"And Then There Were None" Opens This Week at Community Players 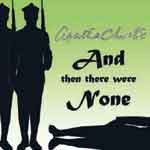 I've read Agatha Christie's "And Then There Were None" in novel form (under a different title -- the book went through a couple of unpleasant, politically incorrect titles post-publication in 1939), seen at least two film versions and three stage productions and I remember the episode of "Remington Steele" that took off on it, and yet I never remember whodunit. "The Mousetrap," I remember. But the killer in "And Then There Were None" eludes me, no matter how many times I see it. It's a mystery!

I do remember the basic plot, however, wherein Christie strands ten strangers on a remote island. The host who invited them, the mysterious U. N. Owen (unknown, get it?), is nowhere to be found. But there is a message for all ten guests, accusing each of hiding a murderous act in the past. They're stuck on the island, wallowing in guilt, eying each other nervously...

And then they begin to die, one by one, in keeping with a nasty little poem tacked to the wall. The last line? "And then there were none." But how can that be? How can there be none left if the murderer is among them? Cue the scary music!

I'm not telling how the plot twist works. That would be cheating. I will tell you that the original book ended differently than the first stageplay, penned by Agatha Christie herself some four years after the book, which means that various film and TV and stage versions have felt free to pick whichever ending they liked better. Which means you may have a better memory than I do and still find the end unfamiliar if you've only run across the one Community Players didn't choose. Two possible endings, ten possible suspects, ten possible victims... That just makes it more fun, don't you think?

"And Then There Were None" opens at Community Players with a preview performance on Thursday, September 1, followed by performances September 2-4, 8-11 and 15-17. Evening performances are scheduled for 7:30 pm, with Sunday matinees at 2:30 pm.

Cathy Sutliff directs a cast including Brett Cottone, Larry Eggan, Jay Hartzler, Hannah Kearns, Nancy Nickerson, Allen Popowski, Aric Rattan, Jeff Ready, Leslie Ringger, Jeremy Stiller and Kevin Woodard as the array of suspects and victims. You may read more about it and match up the roles to the actors, as well as purchase tickets, at the CP website.