"The Diviners" All Set to Go at Heartland 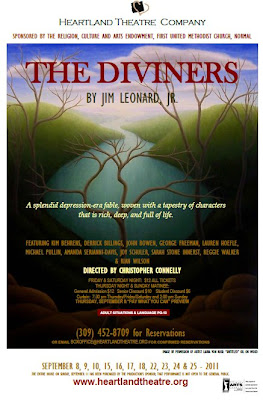 Heartland Theatre's production of "The Diviners," Jim Leonard Jr.'s "splendid Depression-era fable," is in rehearsal and gearing up for a September 8 opening.

"The Diviners" is billed as "a play in two acts and elegies," underlining the play's serious themes on the issues of religion, trust and personal faith, as a lapsed preacher named C.C. Showers arrives in a small Indiana town in the 1930s, coming up against townspeople's conflicting views on what faith really means. The biggest part of C.C.'s problems arise with a teenager named Buddy, who happens to be a first-rate "diviner," meaning he can find water even in times of drought, even though he is also deathly afraid of water.

Leonard's play is poetic and engaging, raising lots of questions without necessarily providing the answers. It was written in 1980, when Leonard was still an undergrad, as an entry for Hanover College in the American College Theater Festival. Since then, the play has been well-produced at high schools and colleges, as well as in regional theaters, as its down-home, unpretentious view of small-town life during the Depression has proved appealing to audiences.

"The Diviners" at Heartland Theatre is sponsored by the Religion, Culture and Arts Endowment of the First Methodist Church in Normal.

For more information or to make reservations, visit the Heartland website here.

Note: The artwork above, "Untitled" oil on wood, is used by permission of the artist, Laura Von Rosk. You may see more images of her work at lauravonrosk.com
Posted by JulieK at 7:58 PM