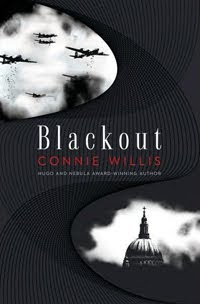 One of my favorite authors, Connie Willis, has just notched her 11th Hugo Award, this time for the two-volume time travel opus called "Blackout" and "All Clear."

These novels involve the same Oxford University time-traveling group as previous works "The Doomsday Book," which took her historians to 1348 and the ravages of the Black Death, and "To Say Nothing of the Dog," a more cheerful piece that takes its time travelers to 1888, just in time to punt down the Thames and run into Jerome K. Jerome.

In "Blackout/All Clear," Willis deals with Britain during World War II, as three Oxford students posing as specific people drop into specific locations -- a housemaid at an English manor house that takes in children sent away from London for safety, a reporter at the Battle of Dunkirk, and a shopgirl at a women's dress shop during the Blitz -- and find that things are not at all as they expected. They also find they can't come back to where they started from (Oxford in 2060) and they may be changing history where they are. Will their actions mean that Hitler wins the war? Will they die where they are so that they don't collide with other versions of themselves at other times? And what do they do with the people they've become attached to back in 1942? 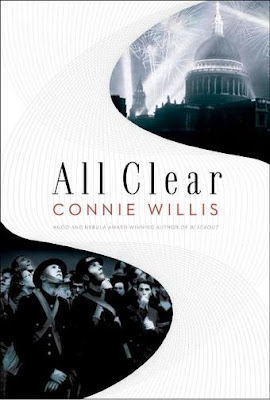 Willis handles all sorts of issues, from life and death to fate and religion and social responsibility, always mixing humor and silliness with her most dire elements. I loved "To Say Nothing of the Dog," and found "The Doomsday Book" ultimately too dark and intense for me. I have put off reading "Blackout/All Clear" for that reason -- I'm not sure I'm over "Doomsday" yet. When I was a history major in college, I sort of loved the Black Death and wrote more than one paper about it for various classes. But "Doomsday" makes it a whole lot more real than my microbiology paper and its attendant rats and fleas did. I suspect "Blackout/All Clear" would be lots more wrenching than watching "Watch on the Rhine" or "Waterloo Bridge" a few more times. I guess I'm a Pollyanna when it comes to time travel.

The 2011 Hugo Awards were presented in Reno, Nevada on August 20th.