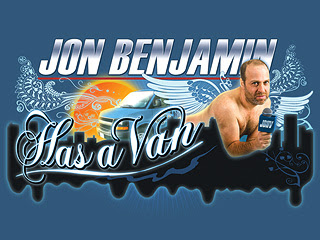 The amazing Pete Guither, whose official title is, I believe Assistant Dean for Communications and Facilities, College of Fine Arts, Illinois State University, shared an interesting communication a day or two ago.

It seems that an ISU alum named Gary Wilmes has a role on a TV series called JON BENJAMIN HAS A VAN airing on Comedy Central, Wednesdays at 9:30 Central time. Wilmes posted a Facebook notice about his show, asking people to a) watch and b) pass along the news, both to get more viewers for JON BENJAMIN HAS A VAN and to test the new social media waters.

"I happen to be on a show you probably never heard of.

The show is Jon Benjamin Has A Van.

It's on the bubble and needs viewers tomorrow night [Wednesday, August 3] at 10:30 pm est on Comedy Central. Just before the Daily Show.

If you can watch it, great. If you have to set your dvrs, cool. And if you can't do either, please re post this post. I'm asking you to make this post go viral.

Share it on your wall. Ask your friends to share it on their wall. Post it. Link it. Like it. Question it. I'm curious to know if this social media gorilla can actually make a difference."

So there you have it.

You can see video clips here as well as more information in general about JON BENJAMIN HAS A VAN, billed as an "inventive, irreverent and hilarious narrative/fake news magazine comedy show." Comedy Central's site also says, "Each show is a new adventure where Jon unwittingly becomes part of a story he's investigating. From hard hitting news to the softer side of human interest stories Jon, and his van, are there. Hop in!"

Remember: JON BENJAMIN HAS A VAN airs on Comedy Central on Wednesdays at 10:30 pm Eastern/9:30 pm Central. And Gary Wilmes, an ISU alum, is in it, even though he is not the naked one with wings in the picture above and he may or may not be in the van. I do know he plays a character named Dave Kneebone, but not his relationship with either Jon Benjamin or the van. I guess we'll all have to watch it to find out.
Posted by JulieK at 1:12 PM