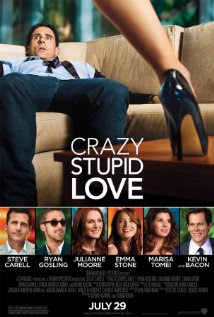 Everybody I know who's seen "Crazy, Stupid, Love." -- the new divorce comedy from writer Dan Fogelman and directors Glenn Ficarra and John Requa -- has loved it. I didn't. I liked it well enough. And it has definitely stuck with me. But I'm just not 100% on board with it. And I'm not exactly sure why.

On paper, "Crazy, Stupid, Love." sounds perfect for me (with the exception of that second comma and the period at the end, both of which really bug). I love Steve Carell and Julianne Moore. I like Ryan Gosling and Emma Stone. I love romantic comedies (I wrote about 35 of them for Harlequin Books, after all) and some of my favorite Hollywood movies are the divorce/remarriage comedies, like "The Awful Truth" and "The Philadelphia Story." There's just something irresistible about two people who clearly belong together who are having a hard time seeing that fact as clearly as we in the audience do.

The trailer for "Crazy, Stupid, Love." makes it look like a laugh-a-minute comedy, but when you're actually watching the film, it becomes clear pretty quickly that that's not really what it is. Instead, it's a sweet, sad movie about the difficulty and pain involved in opening yourself up, the awkwardness of trying to reach out, and overall, just how tough (and yes, crazy and stupid) love can be. And there are times when the aching vulnerability of its characters make "Crazy, Stupid, Love." kind of hard to watch. We've all been stupid for love at some point in our lives, whether we're middle-aged, like Cal and Emily, the couple who've been married for 25 years but are on the verge of divorce, or in the prime of our lives, like 20-somethings Jacob and Hannah -- he's a suave player, while she's the smart girl who keeps spurning his advances -- or so young it hurts, like 17-year-old babysitter Jessica, who has a crush on Cal even as her 13-year-old charge, Robbie, desperately yearns for her.

Steve Carell is a much better actor than people give him credit for (well, it may be his own fault. "Dinner for Schmucks,"anyone?) and he does a beautiful job with Cal, the man who wears New Balance sneakers and baggy Dockers, who is so surprised that his wife wants a divorce that he completely shuts down. Cal is the heart of the movie, and Carell makes every on-screen moment count.

Julianne Moore gets less to do as Emily, the wife who dumps him, and her character is also less sympathetic. Still, the two have excellent chemistry, and Moore makes you wish we got more time with Emily to really figure out what went wrong.

Ryan Gosling has been given the showiest role, as Jacob the womanizer who takes pity on poor Cal and gives him a makeover and some serious lessons in How to Pick Up Chicks. He's been dressed to look like a hipster fashion maven with a hard candy shell, but it is to Gosling's credit that he can do the about-face the script demands and suddenly show the cracks in the perfect facade. He is lucky enough to be playing opposite Emma Stone as Hannah the law student, since she has a warmth and intelligence that humanizes her love interest, too.

Supporting players Kevin Bacon (as the guy Emily cheats with) and Marisa Tomei (as a woman Cal picks up in a bar) do fine work, adding good energy and humor to the mix.

Even the youngsters -- former "America's Next Top Model" contender Analeigh Tipton as Jessica, the babysitter, and a scruffy kid named Jonah Bobo as Cal and Emily's son Robbie -- are compelling and authentic, as well as easy to root for. Still, the sexy bits they get involved in are more than a little cringe-worthy.

My other problems with "Crazy, Stupid, Love." (aside from the title punctuation) are the plot points that strain credulity, like all these people in what looks like a thriving suburban area all going to the same bar, and even though some of them know each other, they never see each other at that bar where they all hang out. There are other big coincidences that I'm not going to spoil, but let's just say that I felt like they were a bit of a cheat, too.

So there's the rub. I fell in love a little, especially with hapless Cal, the regular guy dealt such a hard blow at the beginning. He felt very real, so real I began to root for him and hurt for him and want him to turn out okay. But in the home stretch, Fogelman's script undercut the real emotions with whiz-bang comedy coincidences and slapstick melees, with "Oh, no!" reveals and out-of-nowhere payoffs, instead of a really satisfying conclusion. It's the old bait and switch. Or maybe just a screenwriter who didn't trust his own characters, who felt the need to go silly instead of sentimental when it counted most.