March Comes Roaring in on Area Stages and Screens

The weather may not be getting any warmer, but our entertainment options continue to heat up.

Time Stands Still continues at Heartland Theatre this weekend, with its last performance on Sunday at 2:30 pm, with J.B. and Oklahoma! also finishing at Illinois State University's Westhoff Theatre and Center for the Performing Arts and As You Like It taking its last bow at Illinois Wesleyan's McPherson Theatre. J.B., Oklahoma! and AYLI all run through March 2. 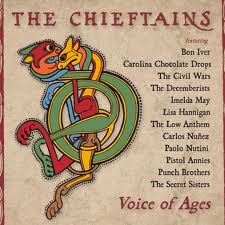 Paddy Moloney and the Chieftains are coming to the Bloomington Center for the Performing Arts for a 3 pm show on Sunday, March 3, in plenty of time to boost your Irish spirits before St. Patrick's Day. This traditional Irish band has won six Grammys in an illustrious 50-year career. Their new album Voice of Ages celebrates that 50-year anniversary with contributions from Bon Iver, the Civil Wars, the Decembrists, Imelda May and Paolo Nutini, among others. You can see a teaser for that album here. For ticket information regarding the March 3 concert at the BCPA, click here.

Heartland Theatre will hold auditions on March 6, 7 and 8 from 7 to 9:30 pm for its April production of Will Eno's Middletown. Director John Kirk will be looking for an ensemble of 9-10 actors to play all 26 roles that make up the small burg called Middletown. Kirk has provided audition information here for prospective actors. 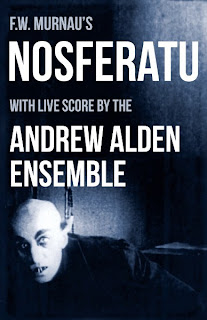 For one night only on March 7, Champaign's Art Theater will offer F.W. Murnau's classic vampire thriller Nosferatu, a silent from 1920. The Andrew Alden Ensemble will provide live musical accompaniment to Nosferatu for this screening, using piano, strings, synthesizers, percussion and electric guitars to bring a spontaneity and immediacy to Murnau's story of the creepy count. This is not the dark, elegant lord of later vampire films, but a strange and hideous pale creature with pointy teeth and ears. He's so much scarier this way!

The Art is also looking for entries into its New Art Film Festival, which takes place in April.They're looking for films by anyone in Illinois, but especially central Illinois, and they'll take features, shorts or "webisodes," preferably made within the last three years. The deadline is March 8, and you'll need to get a DVD to the Art by then. You'll find details here and updates here. 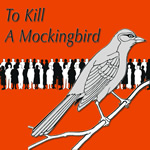 To Kill a Mockingbird is the March show for Community Players, with a preview performance on March 14 and "regular" performances continuing March 15-17 and 21-24. The play, based on the much beloved novel by Harper Lee, tells the story of a Depression-era Southern lawyer named Atticus Finch and his children, Scout and Jem, as the family is caught up in a trial involving a black man falsely accused of a crime. Finch is defending Tom Robinson on rape charges, and the injustice of that trial casts a deep shadow over the entire town, but especially on Scout, who grows up fast as events proceed around her. Marcia Weiss directs for Community Players, with a cast that includes Maggie McHale as Scout, Haani Ansari as Jem, John Bowen as Atticus, Ryan Rembert as Tom Robinson and Bruce Parrish as the mysterious Boo Radley.

Tales of the Lost Formicans, Constance Congdon's exploration of American society seen through the eyes of aliens from the future, opens at Illinois State University on March 28. Deb Alley directs this eccentric comedy for Centennial West 207, with Michelle Stine as a mother forced to move home with her own mom and dad, who will be played by Jacki Dellamano and Joseph Faifer, while her unhappy son, played by Carlos Kmet, acts out. There's also a strange neighbor who happens to be a conspiracy nut, with Hannaniah Wiggins in that role. 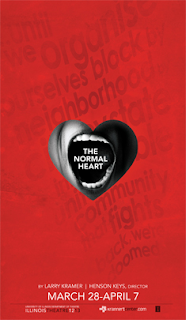 March 28 is also opening night for Larry Kramer's The Normal Heart, directed by Henson Keys for the University of Illinois's Department of Theatre. This fiery account of the first reaction to the AIDS epidemic from within New York's gay community has the potential to break your heart. It has every time I've seen it. It will play within the cozy confines of the Studio Theatre at Krannert Center for the Performing Arts.

Click here for information on The Normal Heart and all the other music and dance pieces coming up at Krannert Center.

As always, I will keep you updated with more events as they appear on my radar. Stay tuned!
Posted by JulieK at 11:33 AM

Email ThisBlogThis!Share to TwitterShare to FacebookShare to Pinterest
Labels: Heartland Theatre, Nosferatu, Tales of the Lost Formicans, The Chieftains, The Normal Heart, Time Stands Still, To Kill a Mockingbird