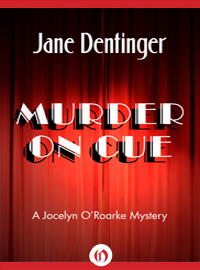 Who doesn't love a good theater mystery? Ngaio Marsh used to write them, Josephine Tey had an actor character or two, Daily Telegraph theatre critic Charles Spencer did a few books with (what else) a theatre critic as his sleuth, and there is currently a cottage industry in mysteries set around and about Shakespeare. Occasionally even a community theater mystery will show up on this side of the pond.

The biggest mystery about Jane Dentinger's Jocelyn O'Roarke series has always been why they weren't runaway hits with the reading public. They're smart and funny, with intriguing murder plots to untangle as well as inside info on the life of a New York theater artist. And Josh O'Roarke, actress, director, general theatrical dogsbody, makes a dandy sleuth.

These days, print copies of Dentinger's books are available only used. But there's good news for fas of backstage mysteries. As of today, all six of Dentinger's Jocelyn O'Roarke mysteries are available in ebook form from Open Road Media. You can read about Dentinger herself here, with details about her past as an actress, mystery bookshop manager and editor. And then, of course, read the books. 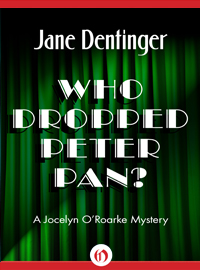 If it were me, I'd read them in order, from Murder on Cue, where Jocelyn understudies a big star in a new play, only to find herself a suspect when the star turns up dead, to my favorite in the series, Who Dropped Peter Pan? wherein the chubby, middle-aged artistic director who cast himself as Peter Pan at a prominent theater gets unceremoniously dumped into the audience during a preview performance. Oops. Who dropped Peter Pan, indeed.

I love Dentinger's prose style and the way she weaves theatrical fact into her fiction, as well as sends up real actors and directors and writers and critics. It doesn't appear that Dentinger is going to add any more Josh O'Roarke novels to this small collection of six, but I suppose we'll have to make do. For now, the announcement that Murder on Cue, First Hit of the Season, Death Mask, Dead Pan, The Queen Is Dead and Who Dropped Peter Pan? are available as ebooks is very good news.

You can order them directly from Open Road Media at the links in the previous paragraph, or find Kindle editions through Amazon.
Posted by JulieK at 11:31 AM