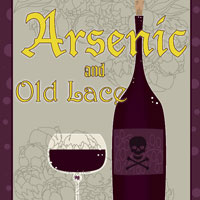 Besides Abby and Martha Brewster, the other roles up for grabs are their nephew Mortimer, a drama critic on the rise who has no idea at the onset about his aunts' homicidal tendencies; Elaine, the girl he loves; Mortimer's brother Teddy, who thinks he is Theodore Roosevelt building the Panama Canal in the basement; Jonathan, another brother, who bears a strong resemblance to Boris Karloff and is generally creepy; Dr. Einstein, Jonathan's henchman and plastic surgeon; Reverend Harper, the man next door who happens to be Elaine's father; friendly neighborhood policemen Brophy, Klein, Rooney and O'Hara; Mr. Gibbs, a potential elderberry wine casualty; and Mr. Witherspoon, the superintendant of Happy Dale Sanitarium.

In the original Broadway production that ran for 1444 performances, Jean Adair and Josephine Hull played the aunts, while Boris Karloff himself played Jonathan. Who better to resemble Boris Karloff than the man himself? A bit of trivia: German director and actor Eric von Stroheim replaced Karloff for several performances in 1942. The show closed on Broadway in June, 1944, with the movie version hard on its heels. When the film was released in September, audiences saw Cary Grant as Mortimer Brewster, alongside Raymond Massey as Jonathan and Peter Lorre as his nefarious pal Dr. Einstein. Adair, Hull and John Alexander, as Teddy, reprised their Broadway roles on film, and Frank Capra directed.

Broadway saw a revival of the show in 1986, with a host of TV favorites filling out the cast. All in the Family's Jean Stapleton played Aunt Abby, while Polly Holliday, Flo from Alice, was Martha, and Barney Miller's Abe Vigoda was Jonathan.

Tom Smith will direct Arsenic and Old Lace for Community Players, assisted by Joe Strupek. They note that auditioners must be at least 18 years old and will be asked to read from the script. They need eleven men to play characters starting at age 20 and three women, one to play Elaine, who should be at least 20, and the others to play the aunts, who should be at least 40. Questions should be directed to Tom Smith at tasmithtasmith@yahoo.com.

Performances of the show, the first in Community Players' fall season, will take place from September 5 to 15, 2013.
Posted by JulieK at 1:16 PM