Here's Looking at You, Mike Dobbins 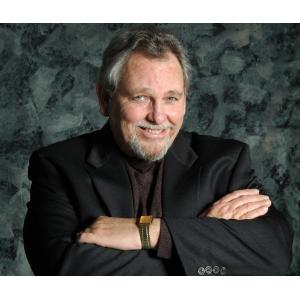 When Mike Dobbins, the managing artistic director of Heartland Theatre Company, passed away on July 10, it was sudden and shocking and unbelievable in a lot of different ways. As I posted on Heartland's Facebook page at the time, "Words cannot convey what Mike has meant to Heartland Theatre for the past 15 years, and his passing leaves a huge hole in our hearts, in our theatre and in our lives." Mike was the heart and soul -- and the face -- of Heartland to so many people, the one who steered the ship and brought it into port safely every time Heartland put on a show. It has been difficult at times to figure out where Heartland Theatre ended and Mike Dobbins began. Or vice versa.

And yet... There are still no words that can really convey the sum and substance of Mike Dobbins. In the wake of his passing, tributes poured in from former students who talked about the kind of mentor, educator and inspiration he had been, from colleagues who noted that Mike was the one who'd welcomed them in and found a spot for them at Heartland Theatre, from Dan Craft at the Bloomington Pantagraph, who described him as someone whose "enthusiasm was always on the surface, ready to infect you," and from actress and friend Kathleen Kirk, who mused on the young Mike, the one we didn't know, in her blog, captured in photographs from his days as a high school teacher in Nebraska.

Each picture painted in tribute gives a slightly different view. In local theatrical circles, we saw him as defined by Heartland, and yet... His family knew very well he had a vibrant life outside Heartland. His son Steve posted his own tribute, about baseball and Pee Wee Reese and keeping score and his Pop's "silent earthquake laugh." A slightly different Mike, and yet the same Mike, too.

When Mike took the stage before almost every performance at Heartland to introduce the show, hand out a free bottle of "Five-Star water, all the way from East Peoria," and hawk the "store-bought cookies" that would be available at intermission, he seemed so open, so warm and easy that audience members really thought they knew him through and through. And yet... Mike's wife Gail, who knew him better than anyone, told me a few days ago that "Mike had a rich, full life, a life outside the theatre." She admitted that it was hard to squeeze that life in around the theatre. "Very hard," Gail said. But he made it work.

Mike the director worked with actors to fill in the edges of their characters and Mike the actor worked with his own roles to find the backstory and the layers. And now that he is gone, we begin to see a more three-dimensional picture of the man we all thought we knew so well. Teacher, actor, director, leader, friend, father, husband... Cubs fan. There's that rich, full life for you.

In honor of Mike Dobbins, I am pulling up an interview I did with him in 2010. Note that Mike is happy to talk about his theatrical career, but he brings it back to his beloved Gail at the end, just so that we all know what was really important to him.

A memorial service and celebration of the life of E. Mike Dobbins will be held on Saturday, August 3 at 4 pm at Calvert-Metzler Memorial Home at 115 East Washington Street in Bloomington. The family has asked that, in lieu of flowers, memorial contributions be made to Heartland Theatre.

And here's that interview. I hope you enjoy spending a few minutes with Mike Dobbins, in his own words.

If you’ve attended a show at Heartland Theatre, it’s very likely you’ve seen Managing Artistic Director Mike Dobbins introducing a show, inviting volunteers, handing out a bottle of water, and in general, acting as the public face of Heartland Theatre Company. But there’s a lot more to what Mike and his wife, Gail, do for Heartland than the general public may be aware of. I had a chance to ask Mike a few questions and get a little more information on who he is and how he came to Heartland, and I thought you might enjoy finding out, too.

How long have you been Artistic Director at Heartland Theatre Company?

This spring is the beginning of my eleventh year as Heartland’s Artistic Director. My work as managing artistic director did not start until a few years after coming aboard at the theatre.

Has the job changed since you first took it?

Things have transformed to an almost miraculous degree for all of us involved in Heartland during the last decade. Audience development and performance quality have grown steadily over the years, and we think Heartland has evolved into something that our actors, directors and audiences can be proud of. If nothing else, we always want our shows to be thought provoking and well performed.

You are the Managing Artistic Director. Tell us what the “managing” part means.

As the managing artistic director I take the reins in both the operations of Heartland Theatre Company and in artistic decisions that influence the quality of our productions. With consistent quality on stage and increased recognition, we have managed to grow our theatre into its newly reconfigured space, capable of holding an additional 33% of audience, and push our production values up to a level that complements our fine corps of acting and directing talent. Management responsibilities at Heartland include everything from simple maintenance of the space to more complicated issues, like assuring compliance with township codes and our lease.

Given the amount of time you and Gail put in at Heartland, it seems impossible that you have a life outside Heartland Theatre, but I know you actually do a whole lot of other things. Talk about that for a second.

The other things that occupy our lives beyond Heartland Theatre Company include trying to stay in step with family developments in Chicago, Louisville, Kentucky, and Tampa Bay, Florida. We have seven lovely grandchildren between 2 and 19 that keep us running. Gail has her own business, Dobbins’ Strategy, and I work at Project Oz as well as teach a few acting classes for Heartland Community College each semester.

What is your background, academically and theatrically?

I have a BS and MA in Theatre from the University of Nebraska at Lincoln and an MFA in Directing from U of I at Champaign-Urbana. I was the NEH Scholar in Shakespeare Studies during the summer of 1978 at Princeton University, which was a paid opportunity to review and critique all of Shakespeare’s writings. I have been teaching theatre for 15 years, including everything from creative dramatics to Shakespeare in Performance. I don’t know how many plays I’ve staged during my career, but I stopped counting after 250.

What was your first interaction with Heartland Theatre?

My first interaction with Heartland Theatre Company was as a guest director. I directed David Mamet’s GLENGARRY GLEN ROSS in 1995. It was an excellent production with an excellent cast.

I know you direct a lot and act occasionally. Do you have a favorite show you’ve directed?

Identifying a favorite is a tough one, kind of like naming your favorite child. Certainly, I have favorites, but they are many, and if I pick one or even a few, then something will be left out. I’d best just say that I’ve been blessed – the ones I have not enjoyed a great deal are few and far between.

Aston in Pinter’s THE CARETAKER, Clarence Darrow in NEVER THE SINNER, Demetrius in MIDSUMMER NIGHT’S DREAM, Petruchio in TAMING OF THE SHREW and Sancho in MAN OF LA MANCHA.

What is your proudest moment at Heartland?

Celebrating the opening of our newly configured theatre with many who had been there since the beginning, who were instrumental in seeing the theatre go and grow through time.

What do you like best about working with HTC?

I never let a day pass that I am not thankful that I have the assistance in all things Heartland of my wife, Gail. This theatre is a huge part of our shared lives. She has so many talents and is so capable in both operations and artistic endeavors.