Marrying Figaro: It's LE NOZZE DI FIGARO from the Midwest Institute of Opera

To celebrate its third season in Bloomington-Normal, the Midwest Institute of Opera is offering a summer treat -- Mozart's Le nozze di Figaro -- in the concert hall at the Center for the Performing Arts on the Illinois State University campus. One cast performed Mozart's opera buffa yesterday afternoon, and a second set of principal performers will take it on tomorrow night at 7:30 pm, with conductor Joshua Greene from the Metropolitan Opera wielding the baton.

Director Beth Greenberg has chosen to set Figaro's comedy of thwarted love, counterplots and seduction in Washington DC during the 1950s, giving it a definite Mad Men style, as you can see from the poster art below. 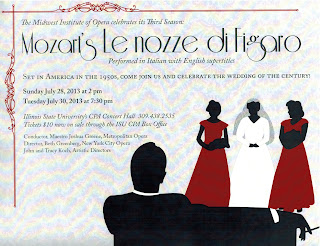 That may look like Don Draper and his trademark draped arm, but it's really Count Almaviva, the powerful married man who is constantly chasing other women. In Le nozze di Figaro (also known as The Marriage of Figaro, which gives you a hint regarding the plot), the woman the Count has his eye on is his wife's maid, who also happens to be the fiancée of his servant Figaro. As Almaviva chases lovely Susannah, he keeps delaying her wedding to Figaro, while the servants conspire against him to get him back together with his Countess and out of their bedroom.

Le nozze di Figaro will be sung in Italian with English supertitles. Tickets are $10 and may be purchased at the door or at the ISU CPA box office by calling 309-438-2525.
Posted by JulieK at 2:58 PM